Microsoft's Bing Maps unveiled a host of new features and functions this week, including the public beta of a revamped user experience with new visuals and dynamic map labels, and a handful of new Bing Map Apps submitted for the King of the Maps competition. One of the newest apps now ties Bing Maps into the OpenStreetMap community, the online map comprised entirely of free and open geographic data, edited by users in the fashion of Wikipedia. 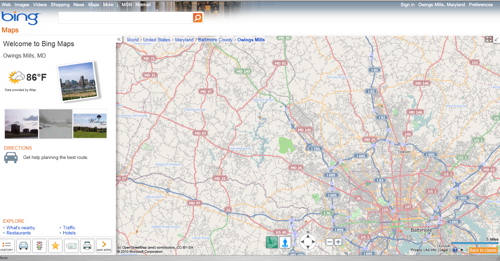 "We've taken the OSM data as is, created tiles to fit our tile schema and are hosting it on our Windows Azure [Content Delivery Network]," Chris Pendleton said in the Bing Maps community blog. "This means, pure OSM data coming down at screaming fast speeds from the massive Windows Azure infrastructure built out to support globally distributed applications…like Bing Maps."

The new OpenStreetMap layer can be found in Bing's Maps App Gallery, once loaded into your Bing Maps, it can then be selected in the "Map Types" menu.