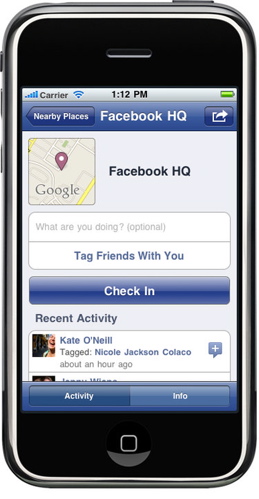 The service launches tonight in the United States as a part of the Facebook application for iPhone, and on the HTML5 touch.facebook.com, and users will have the ability to "check in" to their locations similar to the way users on Foursquare, Gowalla, and Brightkite can, and likewise they can find out who and what is available around them.

When users log into their mobile app, a list of "Nearby Places" will be listed, where they can check in, tag their friends (with their approval, of course), and post a text update which will appear in their friends' feeds. Users will also be able to see a list of other Facebook users nearby under "People Here Now."

Though this is a move to make Facebook more competitive in the burgeoning location-based services class, the social network made its Places API available to the services that would otherwise have been its biggest competitors. Foursquare, Gowalla Booyah (the company responsible for location-based game MyTown,) and Yelp were all present at Facebook's launch announcement Wednesday. Places data goes live tomorrow for partner applications.

10 Responses to Facebook adds check-in feature with "Places," teams up with likely competitors