Friday, 2K Games and Gearbox Software announced they will be releasing Duke Nukem Forever on Xbox 360, PlayStation 3, and Windows PC in 2011. The game was first announced in 1997 and has long been considered the most legendary case of "vaporware," that is, hardware or software that is announced but released either too late or not at all.

The story of Duke Nukem Forever is so legendary that its delay inspired its own parody game franchise. D3's Eat Lead: The Return of Matt Hazard was released in 2009, and featured a gun-slinging action game hero very similar to Nukem returning to video games after a six-year hiatus.

"Gearbox has enabled die-hard key Duke Nukem franchise builders and skilled veteran game makers to stand together and deliver," Randy Pitchford, president of Gearbox Software said today. "All gamers deserve a happy ending and after all of us gamers feeling the full range of emotions about Duke Nukem Forever, I am thrilled to be in a position with the trust, power and means to make it happen."

Following 3D Realms' hit Duke Nukem 3D in 1996, the company announced Forever a year later. In November 1997, it was featured on the cover of PC Gamer, and hype for the title was pretty high. A series of setbacks pushed back the game's release, but it was never cancelled. 3D Realms changed its website to say the game would be released "when it's done." 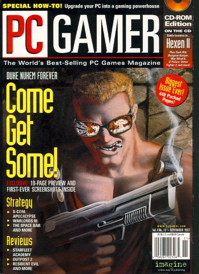 Five years after the title was announced, 3D Realms' then-president George Broussard told Wired magazine, "We're undeniably late and we know it. We've switched engines a couple of times, and we've started over a couple of times. We've made some mistakes, and we've learned from them. I'm just glad we're in a position to do those things, and to be able to make the game we want to make, instead of being rushed out the door to meet stock projections."

In 2008, 3D Realms' president Scott Miller spoke on rumors that Duke Nukem Forever would be released some time that year, but still did not announce a date.

"We can't make an official announcement," Miller said. "Frankly, we may miss the mark by a month or two, but I feel very confident that we're on target this time. It's definitely an internal push."

Of course, 3D Realms never did put out the game. In 2009, funding issues caused the company to shelve development, which then caused publisher Take-Two Entertainment to sue 3D Realms for breach of contract.

"Our relationship with 3D Realms for Duke Nukem Forever was a publishing arrangement, which did not include ongoing funds for development of the title," said Take-Two VP of communications Alan Lewis at the time. "In addition, Take-Two continues to retain the publishing rights to Duke Nukem Forever."

Gearbox Software --which recently scored a big hit with dystopian first person shooter Borderlands-- subsequently picked up development of the title, and is giving attendees at Penny Arcade Expo (PAX) this week an opportunity to actually play portions of the game.