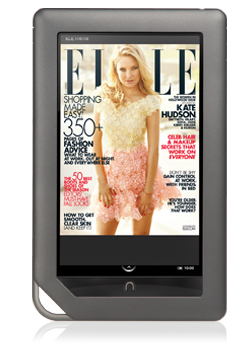 The NOOKcolor is just under half an inch thick and weighs 15.8 ounces, it features 802.11b/g/n, comes with 8GB of storage, supports microSD cards up to 32GB. The battery life is purported to be around 8 hours if the Wi-Fi is turned off.

Though the color touchscreen is sure to entice consumers looking for that experience in their e-readers, it comes with a handful of drawbacks. For example, the battery life of an e-reader with an electrophoretic display is much longer than an LCD device, reading in sunlight also becomes more problematic on a backlit LCD than on an e-paper screen.

Also, like many of the other tablets built on the open source branch of Android, the NOOKcolor does not feature access to the Android Market and its 100,000+ apps. However, it does support "NOOK Extras" such as Pandora Internet radio, various games, and media player.

The new NOOKcolor can be pre-ordered both online and in stores for $249 and it will begin shipping around November 19.

Barnes & Noble today said the NOOKcolor is the "first full-color touch device dedicated to reading everything and built on Android," but in reality, the bookseller's biggest brick and mortar competitor, Borders, began taking pre-orders for the Velocity Micro Cruz Tablet T103 back in August.