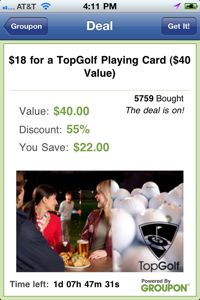 Wednesday, Mobile loyalty card app CardStar announced it has become the first app of its ilk to partner with Groupon, the extremely hot daily deal service, and users of its iPhone and Android apps in more than 160 cities will have location-specific access to Groupon deals.

CardStar lets users scan or manually enter all those shopping rewards cards into a single app, and then their smartphone's screen can be scanned at the cash register when they check out. Generally speaking, the app focuses on cards that users already have or ones that they get separately from CardStar. But with this new version of the software, users can now sign up for new cards directly through the app, and with the Groupon deal, membership isn't even required to view the daily deals.

"We didn't want membership to be an impediment to new users," CardStar CEO Andy Miller told us this week. "So you can see the Groupon deals available to you, even if you're not a member."

If you've added the Groupon card to CardStar, a little "sales tag" appears next to the card's name whenever there's an active deal, and if you click on it, it goes to an interface within the app that's been designed to feel like the Groupon site. The app shares your location and user data with Groupon, and if you've looked at a deal, but didn't buy into it, you can go back to it later on the Groupon site and it knows that you saw it on CardStar.

The last time we talked to CardStar was when they integrated their app with FourSquare, the formerly hot (and now not so much) location-based service. We asked Miller about whether these are just passing fads.

"Foursquare's competitors, Brightkite, Gowalla, and so on, all those guys are pivoting, but Foursquare is staying the path, they have a long uphill battle. I mean, Facebook Places is just crushing everybody," Miller said. "But Foursquare, I don't think they're toast. I think they're in a pretty great niche market."

"Now you're seeing this explosion in daily deal sites, just like you did in location-based services," continued Miller. "The same thing could happen again. It'll change more after Google's Groupon clone takes root, and when Facebook unleashes Facebook Deals. What does that do to Groupon and LvingSocial? No one knows, but it could all converge. A lot of folks will want to be in this business."

Indeed, since Groupon caught on, daily deal sites have begun springing up like weeds. In December, there were more than 200 daily deal sites in the US alone. I asked if CardStar will partner with any of them to flesh out the app's daily deal offerings.

"It's funny, we're announcing the partnership with Groupon today, but we actually know the guys at LivingSocial better, and we've had discussions with them. We've also talked to the company that powers AOL's deal sites and Mobile Spinach," Miller said.

"At the end of the day, I think we should partner with whoever offers something unique to our users. Among all these daily deals, we're seeing a lot of overlap," said Miller. "I'm signed up for 4 cities, and I'm seeing the same content in a lot of them, they seem to all be sourcing the same deals. But as long as a service is providing original content and creating unique utilities for users, we'll check them out."

Announcing a partnership with Groupon at this point in time, naturally leads to one question: What did you think of their Super Bowl ads?

"I was getting texts from friends about the Groupon commercials as well as the LivingSocial commercials whenever they happened. They weren't scandals, though," Miller said. "People were just surprised at seeing them on TV at such a prime, $3 million per minute advertising time. The people who texted me obviously weren't aware of how much money these companies are making right now."