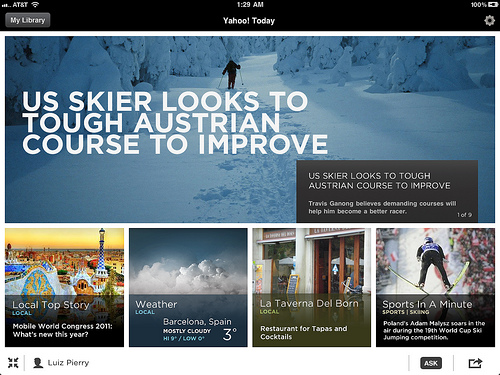 Yahoo on Thursday announced that it will soon debut a new magazine-style method of digital content delivery especially aimed at touchscreen mobile devices like tablets and smartphones called Livestand.

"Publishers and advertisers must expand their content to [phones and tablets] to stay in front of consumers," said Blake Irving, Executive Vice President and Chief Product officer at Yahoo. "We see an opportunity to provide publishers and advertisers with a pipeline for fresh and active content and to help them reach and engage their most valuable audiences."

Irving says Livestand will debut in the first half of 2011, and it will make Yahoo's sports, news, and finanical content available, as well as Flickr, omg!, and the Yahoo! Contributor Network as iPad and Android tablet apps.

While service and software providers are opting for HTML5 and rich web applications instead of releasing standalone mobile apps, it appears that media companies are sticking with apps. Yahoo is following companies such as Flipboard, Catalogs.com, and News Corp, who have released "magazines" for tablets.

"With Livestand, we're using ad formats that evoke the emotion of TV advertising with a highly-visual magazine-like experience. And they're combined with the effectiveness of an Internet ad that's data-rich, actionable, even location aware," Irving said on Thursday.

For the last six years, Yahoo has unveiled dozens of different ways for users to access Yahoo content on mobile devices. In 2006, it launched Yahoo Go which eventually evolved into Yahoo Mobile in 2009. In 2008, it launched onePlace, a mobile app for organizing and sharing web content, and oneConnect for managing contacts and social network content. At the same time, it's released apps for iOS, BlackBerry, Android, and Windows Phones covering the gamut of its services. More recently, it's unveiled Yahoo Entertainment, Sketch-a-Search, and Sportacular specifically for iPad.

There's no doubt Yahoo's got a strong grasp of the importance of a mobile presence, but creating a magazine for tablets has not proven to be a panacea for all content providers.

News Corp. recently took the "tablet magazine" approach with its iPad app called The Daily, and while it received passing marks from some reviewers, others completely trashed it. The Telegraph went so far as to call it "a complete failure of imagination."