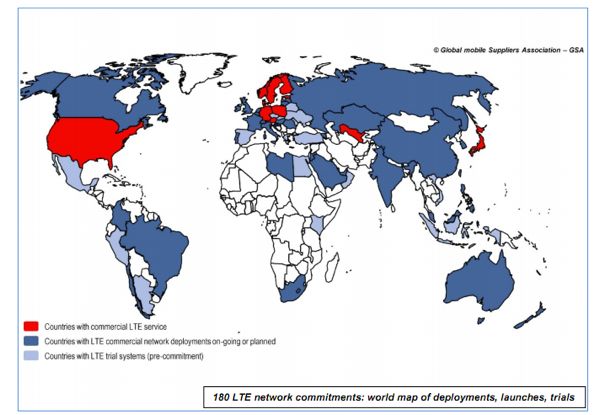 This week, the Global Mobile Suppliers Association (GSA) and 4G Americas released ecosystem reports that illustrate the progress of the 4G network technology LTE a little more than one year after the first commercial networks went live in Norway and Sweden.

Currently, there are 19 LTE networks up and running out of the 173-180 that network operators have committed to, or just about 10% of its eventual worldwide footprint. These networks are run by 17 different operators in 12 different countries: Austria, Denmark, Estonia, Finland, Germany, Hong Kong, Japan, Norway, Poland, Sweden, USA, and Uzbekistan.

The GSA says LTE is the fastest developing mobile technology ever.

Consumer devices supporting the network technology, however, are still few in number, with only 6 smartphones, 6 notebooks/netbooks, 7 mobile tablets, and 22 modules expected to be available this year. This total is actually a 55% increase from the GSA's last report, which was published only five weeks ago.

A number of these devices, however, have not reached commercial availability yet, and we expect to see at least a couple of them at CTIA 2011 in Orlando, Florida next week, like the ZTE Light LTE, and the LG Revolution. Furthermore, the organization is only privy to product information that has been announced or leaked, so there could conceivably be a few more additions to the list next week.