Carriers will make sure no one wins the smartphone wars 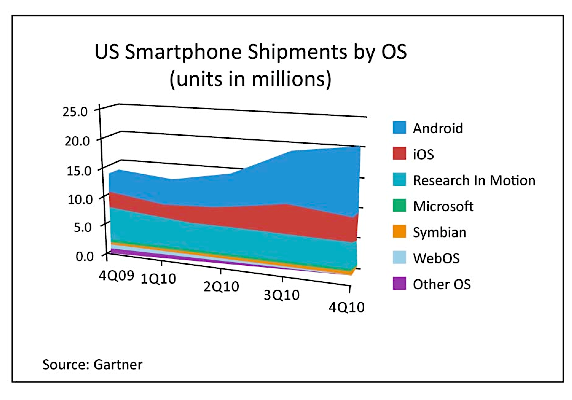 Let's say your company wants to produce smartphone apps. On the conference room white board, developers have laid out the beginnings of a small-screen game that will make Angry Birds look like Ms. Pacman. Everyone's pretty excited.

You don't have much budget, so you're going to have to start by focusing on one platform and fan out to others once you're successful. Time to bet on a horse, and start immersing yourself in the ecosystem.

OK, so Blackberry World is underway this week in Orlando, and Google I/O kicks off next week in San Francisco. Where do you go? Conventional wisdom would tell you to hone in on the Android track at Google I/O. Android's had all the momentum in the smartphone market lately, growing its share from almost nothing to market leader in less than 18 months.

In this case, conventional wisdom would point you to the wrong coast. This is the U.S. smartphone market, where a handful of powerful carriers stand between you and your potential customers like the Statue of Liberty in New York Harbor. And like the Statue of Liberty, the U.S. carriers welcome your tired, your poor, your huddled masses. It is a key reason why newcomer Android was able to leapfrog Apple's iOS in such an astoundingly short time: the carriers needed something to neutralize Apple, and Android was the best bet.

It is also why the Android folks increasingly are feeling less the hunter and more the hunted. Seen in this light, it is easier to understand why Google is now cooperating with the carriers by pulling tethering apps from the Android Market, a move that is raising the hackles of the Android faithful.

Now, there are no guarantees that Blackberry, which is still nursing wounds sustained during Android's ascension, will become the carriers' next darling and re-gain market dominance as a result. But if Research in Motion's updates to the aging platform prove to be competitive, the carriers will give Blackberry every chance to succeed. The same holds true for Microsoft's Windows Phone 7 -- and for HP's WebOS, or for any new kid that might show up.

This upside-down market dynamic and what it means for investment decision-makers in the smartphone ecosystem is the subject of a new white paper -- "Android v. Apple: Why No One Will Win the Smartphone Wars" -- developed by NetShelter in collaboration with contributions from influential editors from SmartPhone Experts, AndroidCentral.com, AndroidandMe.com, AndroidTapp.com, and Mobileburn. I am the author.

"The carriers will give down-and-out platforms every chance to regain shelf space, provided they can dust themselves off, re-invest and re-emerge with a compelling alternative," the white paper says. "This has profound implications for players across the mobile landscape -- applications developers, handset makers, chipmakers, marketers and retailers."

It's like this: Individually, the carriers compete among themselves for customers. But they share a common goal learned from the PC-era -- and again during Apple's influence over music with iPod and iTunes and its recent reign in the smartphone market: Never allow a platform to gain so much influence that it can wrest control of the market from carriers' hands.

There's only so far carriers will let Android go or let Google control. The recent huff about tethering apps signals what lies ahead.