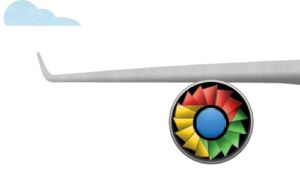 Virgin America is maintaining its reputation as the darling airline of the tech sector, and today it announced a new partnership with Google that will give travelers the option to test Google's Chromebooks in their flight beginning tomorrow.

The promotion will last until September 30, and passengers will be able to check out a Chromebook at their departure gate and use it freely with Gogo in-flight Internet on their whole flight. In addition to the currently available Chrome apps, Virgin America has co-developed a special Chrome app with Google that includes discussion boards about Virgin America's trip destinations, city guides based upon data from UrbanDaddy, and information about packing and travel planning. The app will be available in the Chrome Web Store later this month.

The move is similar to one made by American Airlines earlier this month, when it announced that it will be letting its first class passengers use Samsung's Galaxy Tab 10.1 for in-flight entertainment. But it is by no means a copycat move: Silicon Valley-based Virgin America has a fierce aim on the high-tech community.

Last year, for example, it ran a campaign that awarded free airfare between LAX/SFO and Toronto to social media influencers, and the in-flight entertainment systems and mood lighting are well-regarded among frequent flyers in the tech scene.