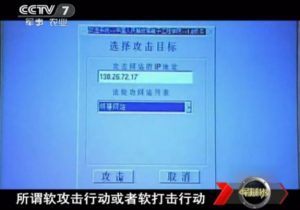 It was probably a slip-up and appears to have been taken down, but a Chinese documentary on cyber-warfare shows attacks being performed against US-based Internet properties of Falun Gong and other organizations banned in China. Thanks to F-Secure for passing this on, although they appear to have picked it up from the Epoch Times.

The video was entitled "Military Technology: Internet Storm is Coming" and was published on the Government-run TV channel CCTV 7, Military and Agriculture (at military.cntv.cn). According to F-Secure the specific URL was:

And the captured segment at around 13 minutes into the program. The main video is still up, but I don't see the captured portion so it's likely, as F-Secure expected, that the embarrassing part has been removed.

The address of the site shown being attacked belongs to the University of Alabama at Birmingham. F-Secure provides these
translations of the Chinese text in the attack screen:

"ATTACK" is one of the buttons in the program.

Cyber attacks by Chinese authorities against western targets are widely assumed to be widely committed, but it's rare for proof like this to be made so convenient. F-Secure has posted an animated GIF showing the attack screen.

2 Responses to Chinese government documentary shows attacks against US sites