100 tablets to choose from, and you can name just one -- iPad

The year 2011 will go down in the history books as a great year for tablets mostly for Apples iPad, however -- not all tablet vendors fared as well as Apple. It's not for lack of products that prevented Android tablets from taking any market share away from Apple this year. By our calculation, over 100 tablets were introduced since the iPad.

However, we defy even the most tech-savvy of you to name more than a few of them. What was so wrong with the competition that it failed to make any inroads in the tablet market, at least until the Amazon Kindle Fire and Barnes & Noble Nook came along? I'll explain why we think Apple and Amazon will continue to dominate the market well into 2012.

Differentiate Your Tablet or Die

Data in the chart above from Google Trends supports the lack of interest in iPad competitors until the Amazon Kindle Fire and Barnes & Noble Nook Tablet came to market. Most of the tablets this year from vendors like Samsung and Sony looked similar, were priced similarly and had most of the same features as the Apple iPad. With no clear differentiation it's no wonder that consumers rejected these alternatives in favor of the iPad (with the possible exception of Samsungs Galaxy Tab). Amazon, and to a lesser degree Barnes & Noble, is selling more than hardware; they are selling an experience and a window into a world of content. Apple not only sells content but welcomes their customers into an entire ecosystem of tech. It's clear, the days of selling undifferentiated hardware have come and gone.

Is the Google/Android Tablet a Flawed Business Model?

Unlike the Android smartphone market, where carriers subsidize phones and make money on monthly fees, Android tablet makers can't undersell Apple because the profit they make on their hardware is all they get. Apple not only makes money on the iPad but also rakes in money selling apps and other content and services.

In the Android tablet market, Google makes the money on the apps and as far as we know doesn't share any of it with the tablet manufacturers. Amazon and Barnes & Noble, on the other hand, have a nice supplemental income not only from selling apps in their own private app stores but selling content like books, movies and in Amazons case selling goods in the Amazon.com marketplace. For that reason Amazon and Barnes & Noble can vastly undersell Apple by sacrificing profit on the hardware in return for high margins on the content and services.

Tablet Price Barriers Were Blasted Away

Although Apple has enjoyed robust sales of the iPad, through past studies, we have been aware of a large group of consumers who had been waiting for a more affordable iPad competitor. When Amazon broke the $200 price point (Barnes & Noble wasn't far away with $250), consumers voted with their pocketbooks and jumped into the tablet market. Amazon is able to offer a product with little or no profit margin presumably because they can reap greater rewards with things like subscriptions to their Prime service, which builds loyalty, reduces friction for buyers and adds sales volume to Amazons bottom line. Apple also makes money selling apps and content but they have a long legacy of commanding premium pricing for quality products.

Will Apple offer an Inexpensive iPad?

Will the popularity of a $200 tablet require Apple to rethink their price premium philosophy and lower prices? That's the $499 question as we move into 2012. If the price history of older iPhones is any indication, we should expect to see a price reduction of the iPad 2 as it gives way to the iPad 3, but we doubt we'll see anything as dramatic as a sub-$300 tablet.

That begs the second big question for 2012 which is: if Apple doesn't lower prices, will they be able to hang onto their market share? As long as the big tablet manufacturers can/t make money selling software, content or other services and Amazon doesn't become a greater threat, it doesn't look like Apple will see a need to lower their prices.

Amazon May Have Legitimized the Seven-inch Tablet 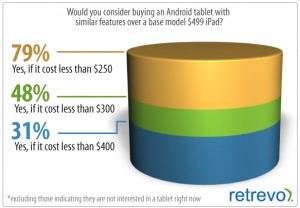 We've seen many other tablets smaller than the iPad's 9.7-inches introduced this year. Before the Kindle Fire and Nook Tablet came along there were plenty of 7-inch tablets and by our calculation more than one-third of the tablets currently on the market are 7-inch versions. Despite the large number of 7-inch tablets, it took the Kindle Fire and Nook Tablet to make the 7-inch tablet attractive -- however, whether the 7-inch sizes gains even more acceptance remains to be seen.

Will Apple determine that a 7-inch tablet is necessary to compete and introduce a 7-inch iPad mini? In a recent Gadgetology study we found many consumers were ready to consider a 7-inch tablet. Some respondents indicated that a 10-inch tablet was too large and heavy to comfortably hold in one hand and would prefer a 7-inch tablet.

Apple might also find that a 7-inch Retina display could offer higher yields resulting in a tablet that is much cheaper to manufacture. On the other hand, if rumors turn out to be true and using the 9-inch Kindle DX to support the argument, we could see a 10-inch Kindle Fire in 2012. If such a tablet does materialize and it's priced as competitively as the 7-inch Fire was, Apple could feel even more heat from Amazon.

Can This be more than a Two-horse Tablet Race? 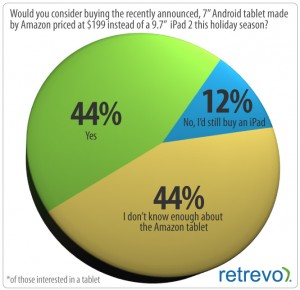 If the tablet market for 2012 develops into a two-horse race between Apple and Amazon, where does that leave all the other players? Samsung, Toshiba, Lenovo, Sony and the other traditional hardware manufacturers will need to differentiate their tablets through unique designs, features, content, niche markets or even pricing. Barnes & Noble will be challenged to compete with Amazon's strength in content offering, marketing prowess, technology (i.e. Cloud) expertise and their ability to undersell them. Google could help bring new features to Android tablets including their recently leaked Prime-like service but, perhaps Google should first concentrate on helping the Android tablet apps market grow to compete with Apple's much larger iPad-optimized app library and figure out a way to share content revenue with tablet manufacturers.

Microsoft's new Windows 8 operating system could help create more interest in a Microsoft ecosystem that might include smartphones, Xbox consoles, PCs and even tablets. Microsoft, perhaps with the help of Dell, HP and others, could also make a play for the enterprise tablet market, an area where Amazon and even Apple lack the sales and marketing prowess for those potential customers. In any case, 2012 should be an interesting year for tablet buyers.

Tablets as Accessories and More

As the Year of the Tablet carries over into 2012, we expect to see tablets continuing to appear everywhere. Not only will they be used in front of TV sets but they may provide the smarts for TV sets. We expect to see tablets in the TV manufacturers' booths at the upcoming Consumer Electronics Show used to help differentiate their televisions. We also expect to see tablets (and phones) providing an extra dimension to all kinds of devices, including TVs and appliances. Additionally, we see tablets being used as control and information devices in a cars, hospitals, hotel rooms, school rooms or just about any place you can imagine. The potential market for tablets is huge and can only getting larger.

Apple will almost certainly introduce a high-resolution Retina display in an iPad 3 this spring, making them more competitive with new tablets. But will Apple iPads still be priced out of range for many consumers? In 2011 we saw many tablet vendors go up against Apple with all sizes of devices, and none had much success until the Amazon Kindle came along.

Now it appears that 7 inches may be an acceptable tablet size and there also appears to be a strong market for an under-$200 tablet as long as it has something like a rich library of content and services to differentiate it. Will Apple's strongest competition continue to come more from book sellers Amazon and Barnes and Noble or will traditional hardware manufacturers be able to find some differentiation to capture a piece of the market as well as a way to make money in the tablet market? 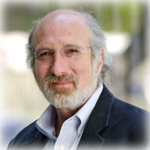 42 Responses to 100 tablets to choose from, and you can name just one -- iPad