Jury says Android does not violate Oracle's patents, APIs up next in landmark case 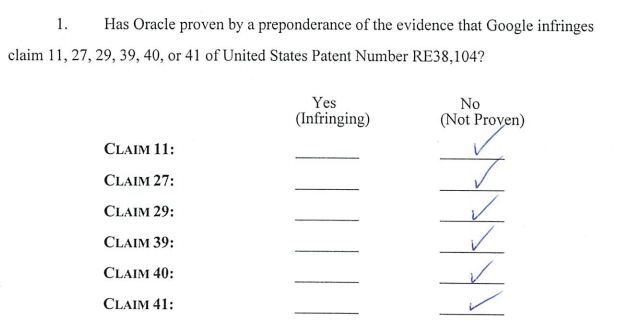 The fight between Oracle and Google over Android's use of Java took a turn in Google's favor, filings from the District Court for the Norther District of California showed on Wednesday. The jury in the patent phase of the case unanimously voted that Oracle did not prove Android had infringed on Oracle's Java patents.

This decision settles only part of the lawsuit, which Groklaw remarked has been the "longest civil trial" they have ever covered. However, it is a big part. Oracle was calling for an injunction on Android plus damages in its suit, and now that the jury has found no patent infringement, the threat of injunction is nullified.

Android, it appears, is safe.

However, there is still the contentious question of whether software APIs can be copyrighted. Two weeks ago, the jury did not conclusively decide whether Android constituted "fair use" of Oracle's 37 Java APIs, and Google and Oracle filed a stack of documents on Wednesday that cover interfaces, exceptions, and interoperability for review.

In these documents, Google includes its arguments for fair use of these APIs, which cite both Apple v. Microsoft from 1994 and a lawsuit Sega weighed against software company Accolade back in the days of the Sega Genesis.