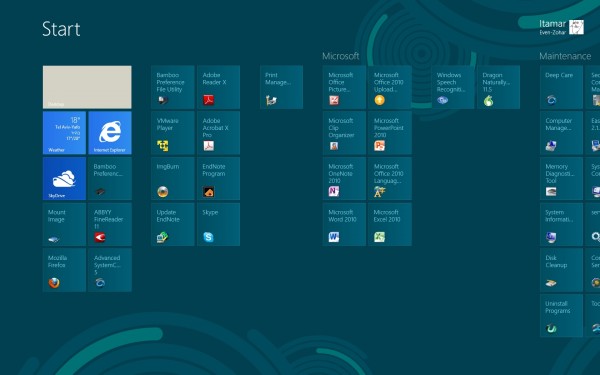 I have been testing Windows 8 Release Preview 64-bit for over 10 days now. I have installed it onto a second partition on two computers: Lenovo ThinkPad T61 and desktop clone computer. On both PCs, Windows 7 is also installed as an alternative OS. I set up dual boot using free tool Easy BCD.

My conclusion so far: this is an operating system one can live with, but that hardly justifies upgrading from Windows 7. That is unless you have got a tablet computer and like the new Metro UI. Since I haven't got one, the new Metro UI for me is just a bother -- simply a hindrance for efficient work. Except for this new user interface there is actually hardly anything new, while on the other hand, not one single awkward or archaic concept has been replaced by something new.

For example, the Registry is the same monstrous labyrinth, the Desktop is the same desktop, and the overall configuration of the computer is basically unchanged, although the so-called Classical Display has been eliminated. In reality, this hasn't changed much the possibilities of customization. I naturally immediately customized the display for "best performance" (only adding "smooth edges of screen fonts") and selected a solid background to allow the icons to be visible.

I'm sorry to say that the amount of garbage that has accumulated in my computer during these 10 days is astounding -- and unfortunately, it could not be purged. For example: items planted by various programs into the Notification Area, which could at least be manually eliminated in Windows 7 can no longer be removed the same way, and I haven't found any direct method for handling the undesirable implants.

However, the Notification Area is a minor trouble in comparison to the Registry, which still needs daily cleansing by dedicated programs, and this will continue to prosper because so much garbage accumulates here and nothing is ever deleted. This is the situation, unless you've got a good uninstall program; Microsoft's remove applications procedure will not take care of the leftovers of misbehaved programs. Based on my short experience, the accumulation of garbage is so quick that I fear that the Registry under Windows 8 will impede fast performance as it has done in all of its predecessors.

Another unchanged feature, Windows Speech Recognition (WSR), which was one of Windows Vista's major innovations, is happily still a built-in feature of the new OS, but is now concealed one level deeper under Easy Access. The feature itself hasn't changed a bit since Windows Vista; it seems that Microsoft has given up on the idea of introducing speech recognition as a major feature. WSR has a great potential to become a superpower tool, especially with its added macro language, which is also concealed by Microsoft for the average user. There is still much to fix in WSR, but in view of the huge investment made so far, it is almost incomprehensible why Microsoft has decided to forget about it.

Memory management has always been a major issue. I have read some contentions that the memory management under Windows 8 should be much better, especially with a 64-bit computer and 4GB RAM or more. My subjective experience: There is no difference between Windows 7 32-bit and Windows 8 64-bit in matters of speed or crashing. During the 10 days of testing, the OS got stuck many times, and I had to resort to Task Manager quite often, even to force reset. This reminded me very much of previous versions of Windows, namely those that preceded even Windows 7. 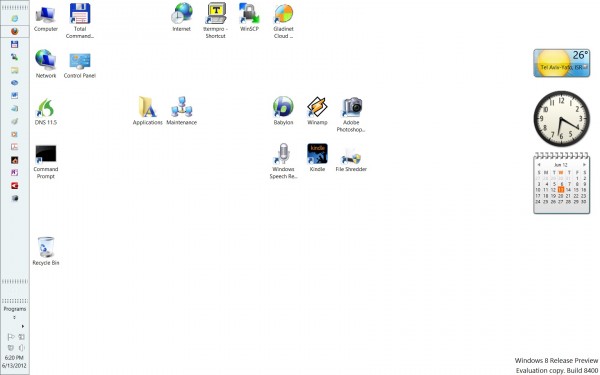 I fully join the opinons expressed by various reviewers that Microsoft make it possible for desktops and notebooks to completely turn off the Metro UI and return to the desktop option. Of course, it would have been nice had Microsoft introduced some innovations into the latter, too, but I believe one can live with the Windows 7 configuration quite well.

Where is Metro's Off-switch?

There is a vicious circle here, because with the Metro UI turned off and the desktop restored, Windows 8 simply becomes quite identical with Windows 7. This does not mean that I would like to have the Metro UI in the first place even if I had a tablet computer. I find Metro applications to be hardly attractive, in part because I can't find any way to control them. Even playing a video by the Metro application turns out to be painful because there are no buttons to control them. I assume that the applications can be controlled not by mouse or keyboard but by touching gestures, but since I've got no access to such options on my computer that couldn't be tested. And frankly, as I use my computer for doing work rather than for playing and gaming, I am not even tempted to get those options in future. On the whole, I find touching the screen of a regular computer to be quite uncomfortable -- and even worse than a mouse for repetitive stress injuries.

Another astounding issue is that after all these years Microsoft has left the user with a primitive tool for copying and moving files, namely Windows Explorer or My Computer, which should have been replaced long ago by an application like the good old Norton Commander or its modern equivalent Total Commander.

Although this is only a short review, there is no way to avoid the extremely painful security measures that often prevents one from accessing one’s own disks. This can sometimes be solved through a tedious and, often unclear, permission and sharing settings. But I find that Windows 8 has made it even tougher than Windows 7, because even when I turn completely off, I still cannot copy, move or open files to my own folders where for some reason I have got no permission.

Against the background of this rather gloomy view, there is one new feature in Windows 8 that might foretell some beneficial future, but its current implementation is rather limited. I am referring to the new sync account, which is the default in W8 (alternatively, or side-by-side with it, you may open “local” accounts). The advantage of the sync account is that some of one’s settings are automatically synchronized on all computers where you open the same user account.

For example, if you add a language on one of your computers, that language will also be configured on all of your other PCs. It would be naturally helpful if such a feature was at least optionally extended to other domains, such as certain folders, though SkyDrive is meant to render a similar service, but with far less comfort.

To sum up this hasty review, I'm not sure what Microsoft has achieved with this OS except the Metro UI that is not likely to serve non-tablet users or encourage people to get one. When a beta tester for Windows Vista, I was quite appalled by its so many useless features and unnecessary complications. Windows 7 later fixed many of those unfortunate components. Windows 8 doesn't appear to be appalling in any way -- it simply lacks any true spirit. It has adopted too much the Macintosh view of computer users as complete idiots.

Naturally, I don't object to providing people with an OS that liberates them from making decisions, but a good OS also can be freely, openly and amply customized by users who wish to do so. And a good OS does not waste the user’s time on such a myriad of places for configuration (Control Panel, Settings under the new Start menu, and more). 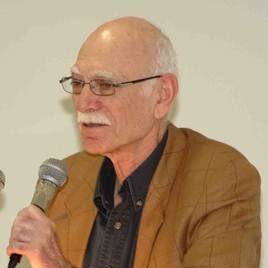 Itamar Even-Zohar has been professor of Culture Research at Tel Aviv University since 1969. He was an early adopter of PC applications and belonged to the first group of pre-Internet networkers ("Humanist Listserv"). In 2003 he founded the Microsoft Speech Recognition Group on Yahoo, which helped promote discussion and powerful use of the feature in Windows.