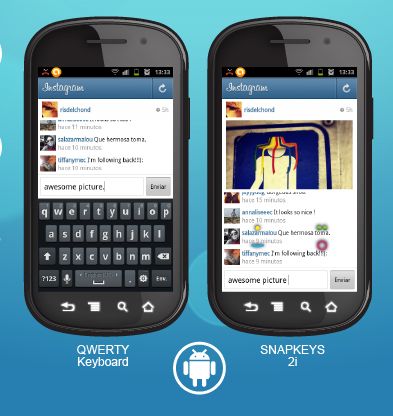 Today, Snapkeys announced the private beta launch of SnapKeys Si for Android. The private beta will allow select registered users to download the app and test it out, nearly a full year after the app first gained notoriety at CES.

One of the most brilliant things about touchscreens is their ability to support alternative methods of typing, Swype and Swiftkey for example have become very popular methods of text input, and they do not require the traditional screen pecking action to work.

SnapKeys is similar. It utilizes only four keys on screen, which divide the alphabet into shapes rather than a QWERTY layout. Due to the simplicity of typing with SnapKeys, it supports various levels of visual transparency and can even be made fully invisible, so typing within apps can be done unobtrusively.

After making its debut at CES 2012, and then following up a few months later at CTIA 2012, Snapkeys has had to quell an eager public asking daily about the condition of the app: if it was real, when it was coming out, and so forth. Today, the company is taking some small steps with the progress of its app, and opening it up to a select audience.

"SnapKeys Si brings a long overdue upgrade to the mobile device market, where the screens of mobile devices have been limited to a QWERTY keyboard and a small text box.” said CEO and founder of SnapKeys, Benjamin Ghassabian, in a statment on Tuesday. “Despite innovations in smartphone and tablet technology, mobile devices today are still reliant on QWERTY-based keyboard designs, which were originally intended for typewriters and computers as a separate peripheral from the screen. The screen space of small mobile devices is precious and cannot be occupied by many keys.”