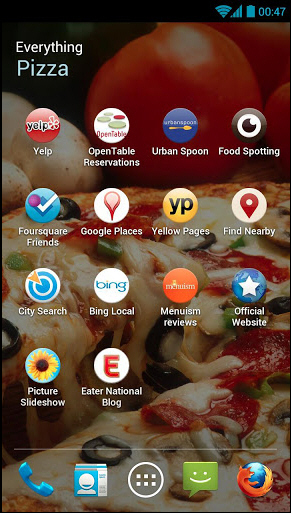 Unlike iOS, Android devices can be very easily customized without the need to jailbreak or root them. This means that there is an ever-growing market in third-party launchers that enable phone and tablet users to try out a variety of new ways to access the apps they have installed on their device. While cosmetically different and packed out with a range of extra features, most launcher are generally fairly similar, but this same cannot be said of Everything.me which adapts itself according to what you are doing and where you are.

The idea is simple. Launching apps and accessing information is now seen as being the same thing. Looking for a recipe you have stored in an app you use? Type ‘recipe’ and a list of corresponding apps will show up. In addition to this, you’ll also be shown a list of related websites so you can check out other recipes online. Breaking down, or at least blurring, the barriers between local apps and online services is an interesting approach.

There’s also scope for tailoring search results to your current location. Look for restaurants and you’ll be able to find out what is nearby. As well as ensuring that you have easy access to the information you’re looking for, Everything.me also changes the appearance of your phone according to what you’re doing. Perform a search for ‘football’ and your background will change to the NFL logo.

A launcher that dynamically adapts to what you’re doing can take a little getting used to; it feel strangely unintuitive to start with, but it doesn’t take long to become second nature. It’s really just a matter of retraining that memory muscle.

But there is another option available in the form of smart folders, and these act as a sort of hallway house between dynamic homescreens and a more traditional folder-based launcher. Select a category -- such as a shopping -- and any apps that you have that fall into this category will be automatically added to the folder along with a list of associated online resources. Create a ‘social’ folder and you’ll find that Fourquare, Twitter, Facebook etc are all automatically grouped together for you.

Everything.me is currently in beta but can still be downloaded from Google Play.

One Response to Everything.me launcher dynamically adapts to what you’re doing right now