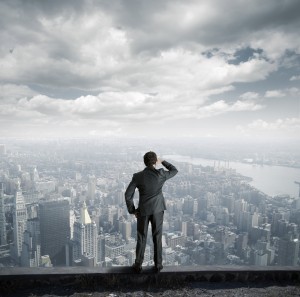 To most people who recognize his name Doug Engelbart was the inventor of the computer mouse but he was much, much more than that. In addition to the mouse and the accompanying chord keyboard, Doug invented computer time sharing, network computing, graphical computing, the graphical user interface and (with apologies to Ted Nelson) hypertext links. And he invented all these things -- if by inventing we mean envisioning how they would work and work together to create the computing environments we know today -- while driving to work one day in 1950.

Doug had a vision of modern computing back in the day when many computers were still mechanical and user interfaces did not even exist. He saw in a flash not only the way we do things today but also the long list of tasks that had to be completed to get from there to here. Now that's vision.

Doug recognized immediately that to even describe his vision to computer scientists of the time would be to invite ridicule. He laid it all out for a colleague once and was advised to keep the whole idea under his hat, it was so crazy.

So Doug spent decades in the trenches building devices and writing software he knew to be already obsolete. But that's what you do when you have a wife and young daughters and want to get to that point in life where you can actually realize the dream.

When that finally happened in the late 1960s at the Stanford Research Institute, Doug had both his most sublime moment of public recognition and his greatest disappointment. The recognition came in December, 1968 in a live 90-minute demonstration at the Joint Computer Conference held that year in San Francisco. Here is a link to that demo.

The impact of this mother of all demos can't be over-estimated. Engelbart and his team showed graphical and networked computing, the mouse, screen icons, dynamically linked files and hypertext to an audience of 1000 computer scientists who until that morning thought computing meant punched cards. The result of six years of work, the demo was equivalent to dropping-in on a model rocketry meeting and bringing with you a prototype warp drive. The world of computing was stunned.

But then nothing happened.

Doug got accolades, but he expected research contracts and those didn't immediately appear. He was not only still too far ahead of his time, he naively failed to realize that vested powers in the research community would keep money flowing toward now obsolete research. When the research really got going again much of it was not at SRI but at XEROX PARC, where many of Doug's team members landed in the early 1970s.

If Apple stole technology from XEROX, then XEROX in turn stole from Doug and SRI.

Being a visionary takes both patience and determination and Doug made it clear he thought the world needed much more from him than just the mouse. He was a huge proponent of the chord keyboard, for example. And when the personal computer took off Doug didn't cheer because he thought the power of a timesharing minicomputer was required. And he was right, because today's PC has the power of a timesharing minicomputer. Doug was delighted when he realized that his Augment system could run faster on a local PC emulator than on the Big Iron at SRI.

I met Doug Engelbart in the late 1970s, introduced by my friend Kirk, who worked in Doug’s lab. We spent a day with Doug for Triumph of the Nerds in 1995. I did a noteworthy NerdTV interview with Doug back in 2005. And just last year for Computer History Day Mary Alyce and I took our boys to Doug's house for a very pleasant afternoon. There has never been a nicer man, at least to me.

I once asked Doug what he'd want if he could have anything. "I'd like to be younger", he said. "When I was younger I could get so much more done. But I wouldn't want to be any less than 50. That would be ideal".