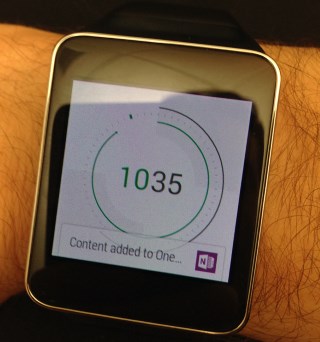 Microsoft continues its recent trend of bringing exciting new features to rival platforms by adding Android Wear support to OneNote. The most recent version of Microsoft's note-taking tool -- suitably named OneNote for Android Wear -- and a new iOS 8-friendly version of the app is also due to launch today. If you've invested in an Android smartwatch (you'll have to wait a little longer for an Apple Watch version), taking a note is as simple as uttering "OK Google, take a note" -- but be prepared for a few weird looks when you try this out in a store for the first time.

To take advantage of the voice-activated features of the app, you will also need to have the main OneNote app installed on your Android phone or tablet. Forget the fact that your smartwatch doesn't have a keyboard -- notes can now be dictated to your wrist in a way that will not in any way make people who may be nearby think you're a little, er, strange. Or, as the Office Blog puts it, "we hope you enjoy using OneNote in a manner even Dick Tracy would envy!"

The first smartwatch-friendly version of OneNote is available free of charge from Google Play, but this is not the only OneNote app on the cards today. We've already mentioned the new iOS 8 app which will hit the App Store at some point today, but Windows Phone users also have an updated version of Office Lens to enjoy.

The app makes it possible to use your smartphone's camera to capture text from papers, posters, noticeboards and the like. These photos are then given the OCR treatment and converted into editable Word documents or PowerPoint presentations. As the Office Blog suggests, it could be used to quickly convert lecture handouts into word files. The video below gives you an idea of what's possible.