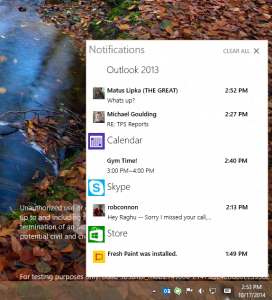 Windows 10 Technical Preview has just been updated. We've been working with build 9841 for a little while, and now it's time for an upgrade.

Today, Microsoft releases build 9860 to people signed up to the Windows Insider Program, and there are a number of key additions. There's the Action Center to handle notifications, new animations, and improved multi-monitor handling.

It's far from being an insignificant download. At 2GB to 2.74GB it is more substantial that we might expect from a regular update, and this is perhaps unsurprising as Microsoft says there are almost 7,000 improvements, additions and fixes.

If you're the patient kind, you can just sit back and wait for the update to arrive, but you may want to hurry things up so you can try out the latest build straight away. To start the download straight away, head to PC Settings, click Update and recovery to the left and then click Preview builds. Now click the Check now button to the right and sit back and wait for the bits to make their way to your hard drive.

As is becoming common these days, Microsoft has listened to feedback. A post on the Windows blog explains that there are a few known issues with the build, but this is unlikely to put off those who want to see what sort of progress has been made since the initial launch.

This was followed an hour or so later by the more exciting:

We’re rolling out our first new build to the Windows Insider Program http://t.co/ust8iG9DMz

We've downloaded the build, we'll have a play around with it for a while and report back. In the meantime, feel free to share your thoughts below.