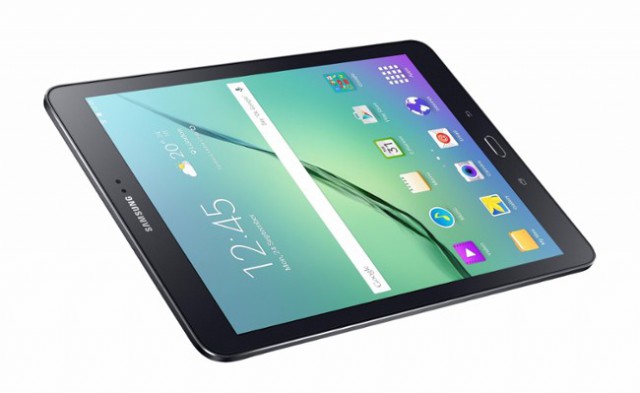 Tablets are often seen as a consumer device, allowing you to update Facebook from the sofa while you watch TV, or catch up with iPlayer in bed. But they’re increasingly finding a place in the business world too, allowing mobile workers to catch up with emails or update documents on the move. They can also be a viable laptop replacement for tasks like making sales presentations.

The iPad remains popular, since it popularized the tablet format, but of late, Android devices have been catching up in terms of quality and capability. Samsung has long been one of the biggest players in the Android tablet market and its latest premium tablet, and the Galaxy Tab S2 is clear evidence of the company’s intention to park its tank on the iPad’s lawn. But how well does it succeed and what does it have to offer to tempt business users away from buying the Apple device?

The package is fairly minimal, you get a white cardboard box and it just contains the tablet itself, with a USB cable and a mains power adaptor. Both of these are white too -- far be it from us to suggest that there’s an attempt to make this like like an Apple device here. It has a clever mains adaptor design which reduces in bulk by means of sliding down the earth pin and which makes it easier to slip into a bag or pocket. Documentation is limited to a brief Quick Start leaflet that explains the position of the main controls and how to charge the device. 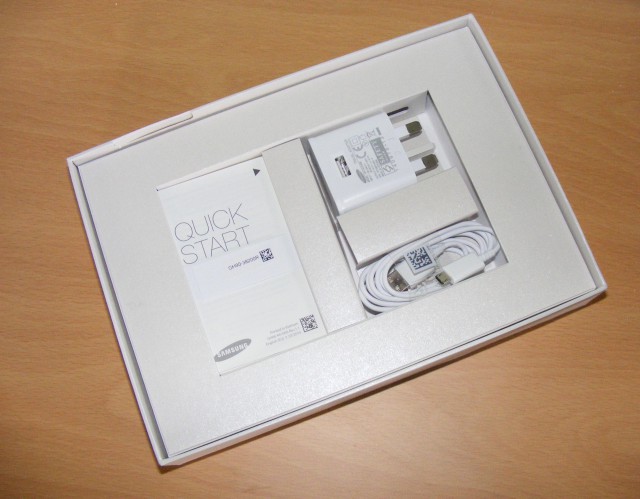 First impressions when you lift it out of the box are that the tablet is nicely weighty and our review unit, in the Gold color option, looks smart with a light grey/beige surround to the Gorilla Glass screen and a shiny metal bezel around the edge. The back is smooth and has a metallic finish, which just about looks gold in the right light, though it is in fact plastic which lets down the premium feel a little bit.

What you do notice is that it’s a svelte 5.6mm thick which makes it easy to slip into a satchel or pouch. It also means it’s almost 2mm thinner than an iPad Air and 0.5mm thinner than an iPad Air 2, it also weighs over 70 grams less than the Air and 45 grams less than the Air 2. First blood to Samsung in terms of the size of the device then. The right-hand edge has the power button at the top and the volume control below it, plus a Micro SD card slot -- you need a paper clip or the little tool provided in the box to open this. On the front below the screen are the Home button, that also wakes the screen from standby and acts as a fingerprint reader, which is flanked by touch sensors for the back and recent apps functions. On the bottom edge are the USB and headphone connectors and the speakers. 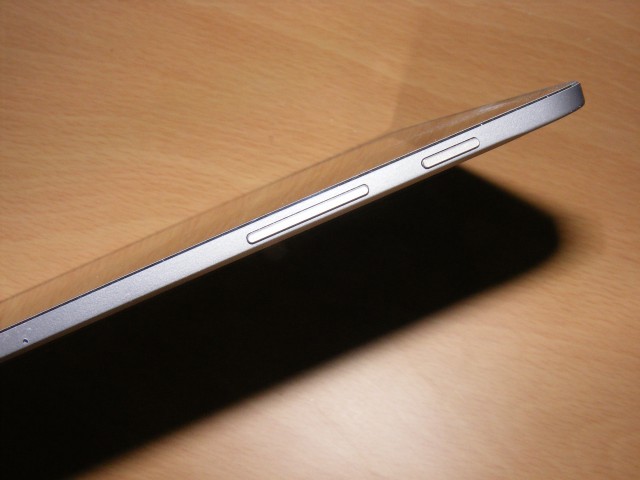 The Galaxy Tab S2 is powered by an octa-core chipset with 1.9 and 1.3 GHz quad-core CPUs and has 3GB of RAM. You get 32GB of onboard storage as standard, expandable by up to 128GB via an SD card. 64GB versions are available too. Our review unit was the 9.7-inch version, though a smaller 8-inch model is also on offer. The star of the show is undoubtedly the impressive Super AMOLED HD screen which has 2048 x 1536 resolution. Other hardware features include 802.11 a/b/g/n/ac Wi-Fi which has MIMO ability for better signal reliability, plus Bluetooth 4.1 with the BLE low-energy function to prevent it from taking too much out of the battery life. You can also get a 4G version should you need connectivity when your out and about with no Wi-Fi access. It has a 5,870MAh battery which promises a decent amount of use between charges. The battery is not removable, however, so it will mean a return to the supplier should it ever need replacing.

Start it up and you find it’s running the not-quite-latest Android 5.0.2 Lollipop, though an update to Marshmallow should be on the horizon. It has Samsung’s TouchWiz user interface rather than the standard Android one and there’s a minimum of bloatware installed. Useful apps that are included are Microsoft’s Office suite, plus Samsung’s Smart Manager to help optimize the device, and a handy multi-window feature. The latter is similar to the Windows’ Snap feature, allowing you to display two windows side by side and therefore make full use of that big screen. You also get a Briefing app that displays the latest news stories, weather, etc in an easy to access format. Most of the pre-installed stuff can be uninstalled if you don’t require it.

The fingerprint scanner obviously makes for good security. You can store up to three prints allowing you a choice of fingers to use and there’s a password backup option should all of your chosen digits be out of action. It takes a little time to train the scanner for each print as you have to stroke your finger across the sensor several times to ensure it sees all areas of the print. Once it’s set up though the scanning generally works well, though it is sensitive to moisture, struggling to authenticate after you’ve washed your hands or been out in the rain and not thoroughly dried your finger tips for example.

The S2 comes with access to Samsung’s KNOX enterprise security suite which allows users to access confidential email and apps securely. It also allows the separation of enterprise and personal information on the device making mobile and BYOD management easier. There are a range of KNOX certified apps available via a separate store, ensuring that users can access the latest tools in a safe, secure environment.

KNOX works with most popular mobile device management (MDM) solutions so IT staff can manage devices remotely and even have the ability to wipe them in the event of theft or loss. KNOX allows the use of VPN connections to protect data in transit too.

The Microsoft Office package gives you access to 100GB of One Drive storage free for two years. This makes the S2 an attractive business tool, allowing you to access your documents from the cloud, making it easy to work from anywhere you have an internet connection and ensuring that you’re never left without a vital file. 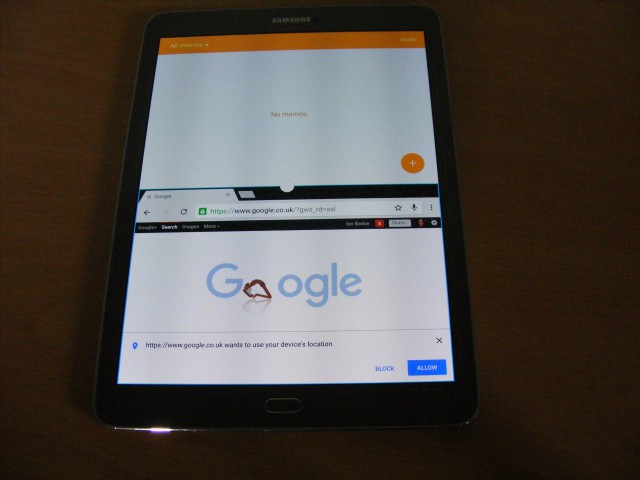 The multi-window feature is a handy tool for business users too, making it easy to refer to documents side by side, or have a browser window open for reference while you edit a document for example. The Smart Manager app scans and optimizes the device, ensuring the best battery life and memory usage as well as cleaning up storage. It also scans for security issues, helping to protect the tablet from malware and ensure that it’s up to date with the latest patches.

All of this is configurable so you can, for example, disable optimization for certain apps that you want to get maximum performance from. The downside of this is it can be a bit of a pest, constantly nagging you with notification messages and sounds. 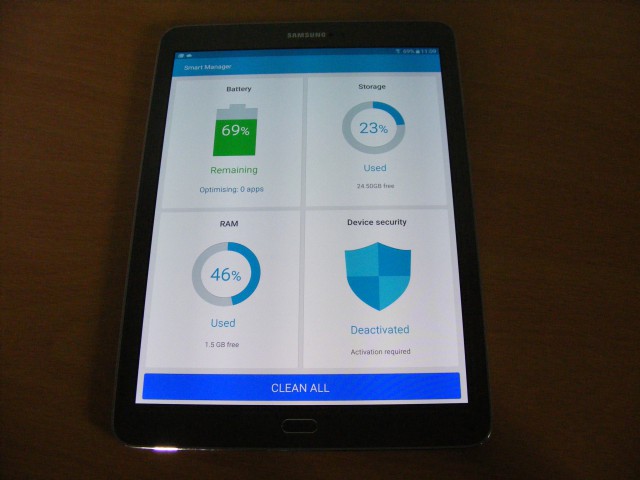 Powering up takes a slightly longer press of the power button than feels strictly necessary, but once the screen lights up the actual boot process is fast giving you a usable tablet in just a few seconds.

The Galaxy Tab has rounded corners, although the edges are flat rather than curved which makes it easy to hold. The 9.7-inch version does feel a bit too big to comfortably hold in one hand for long periods, the 8-inch would be better here, so you end up resting it against something. The screen is impressive and offers crisp images and good colors. It uses Adaptive Display technology that adjusts the brightness and other levels according to the ambient lighting, this means you can easily see it in bright light. It delivers smooth video playback too. There’s also a Reading Mode which lowers the brightness and makes it easier on the eyes if you’re reading long documents or eBooks. 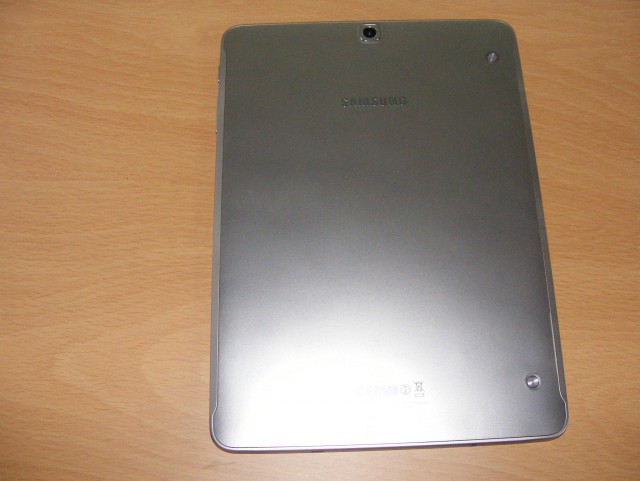 The Adaptive Display does a reasonable job and most of the time you don’t notice it at work, though it doesn’t always get it quite right sometimes making brightness adjustments to little effect. The TouchWiz interface is nice to use with smart icons and an intuitive layout, it’s easy to live with and it doesn’t come as too much of a culture shock if you’re used to standard Android. The downside of course is that you have to wait slightly longer for operating system updates than on a system running vanilla Android. Most importantly the screen is nicely responsive to inputs and that large size screen does mean that it’s easy to use the on-screen keyboard and not worry about hitting the wrong character all the time even if you have less than delicate digits.

Overall there are no performance issues in everyday use, apps load quickly and we didn’t experience any crashes. Battery life is around 12 or 13 hours continuous use, so with casual operation you should be able to go two or three days between charges. It also retains its battery life well when on stand-by.

Tablet cameras aren’t usually about serious photography, the size of the device means it’s not really snapshot friendly anyway, however, the S2’s are reasonably good. The rear camera produces sharp images and good color reproduction in natural light, pictures that are more than good enough to post online. There are also some clever modes including the ability to take 360 degree panoramas. It has the Pro mode found on Galaxy phones too, that lets you adjust contrast, white balance and so on. It does struggle in low light, even if you activate the HDR mode you end up with images that look a little pixellated.

This is disappointing by smartphone standards, but for a tablet it’s probably acceptable. The front camera produces slightly grainy results, especially in artificial light, but it’s good enough for video calling, which is what most business users will want it for, and the odd selfie. 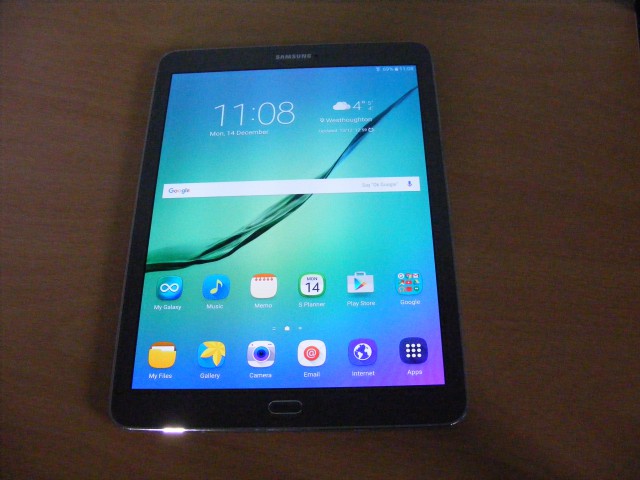 With the 32GB Wi-Fi only version costing £399 direct from Samsung, the Galaxy Tab S2 9.7 is priced on a par with the 16GB 9.7-inch iPad Air 2. It has the same screen resolution in a lighter and thinner package, and of course more storage, so it’s clear to see what the target is here. The Samsung offers good performance in everyday use and is likely to deliver better battery life than the iPad as well.

Features like the ability to use KNOX and the inclusion of Microsoft Office make it an attractive option for enterprise users. The plastic back panel doesn’t detract too much from the quality feel of the device, and obviously it contributes to the Galaxy Tab’s light weight. The cameras are good by tablet standards and it isn’t overloaded with bloatware.

Overall Samsung has delivered a well thought out package with this device and if you were thinking of buying an iPad Air 2 it’s well worth considering the Galaxy Tab S2 as an alternative. It offers you more for your money, good performance and you won’t find yourself feeling that you’ve ended up with second best.