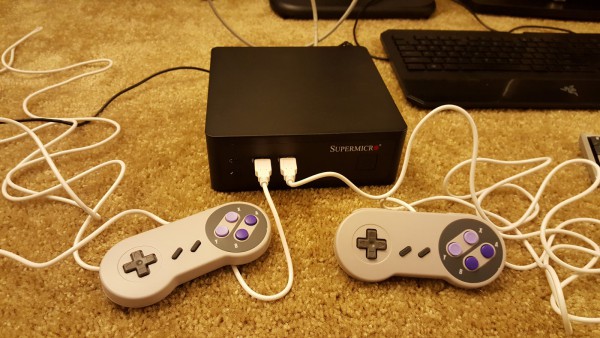 What can you do with 25 watts? Well, let's take a moment to think about it. Today, you can get LED light bulbs that put out about the same amount of light as a 60W or 70W bulb. You can get a pair of speakers that put out twice as much sound as a 25W speaker could only years ago. 25 watts can do a lot of things these days. As technology advances, and power requirements continue to shrink, more and more can be done with less. With smaller and smaller manufacturing techniques, power efficiency will continue to increase. What took hundreds of watts to achieve years ago, can now be done with a fraction of the power.

Today I am writing this story to shed some light on a processor that is rated at 25W -- AMD's Athlon 5350 APU. It's a full quad core CPU and a GPU all in one. It amazes me to think that's even possible. Remember when AMD stuck the first GPU onto a CPU die when it introduced Llano? To think it was only a few years back and now we have the same thing, but using so much less power. It is quite remarkable.

When I first approached AMD about doing a project on this little APU, the company was a bit surprised. I mean out of everything is has, this little power house was the one I was interested in. Apparently this thing is a huge seller in the Latin America region. Should be here in the US too if you ask me! I feel all the high end products get the most attention in tech. But sometimes those high end products don't always fit the bill.

See, the great thing about low end products like this is the much smaller power requirements. Hence my intro about 25 watts. With such a low draw, you can fit this bad boy into such smaller places. High end CPUs and GPUs suck massive amounts of power from your outlet. Yes, they are powerful, but they also generate lots of heat. They require large power supplies and cooling solutions. This limits how small your build can go. Why do you want such a small build? Well one great use is for a console sized HTPC. In this case I am using it to make a small emulation PC. 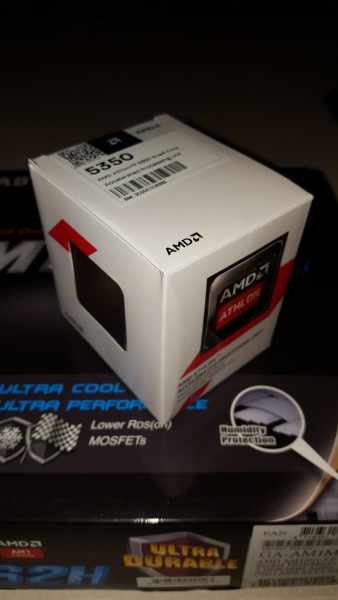 Now before we get into the in's and out's of this build, we have to have a talk since I said the word "Emulation". I don't condone software piracy! Please do yourself a favor and make sure you own any games you plan on playing via emulators. Whether it be a physical copy or a ROM file that was extracted from, say, a Steam version download. Just make sure the people that deserve the money for their work get paid. We all want to see developers continue to make great games. But if they aren't making any money doing it, its not going to happen. For those not in the know, emulation is the action of copying one computer's functions with another. Classic video game consoles are computers and can be essentially simulated via emulation on PCs. 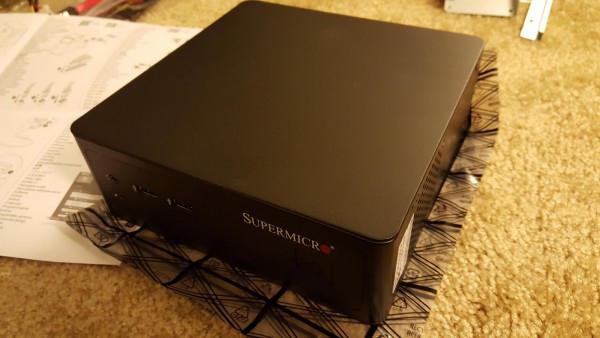 So, with that out of the way, let's see just how small and what kind of performance you can expect with such a tiny power envelope. 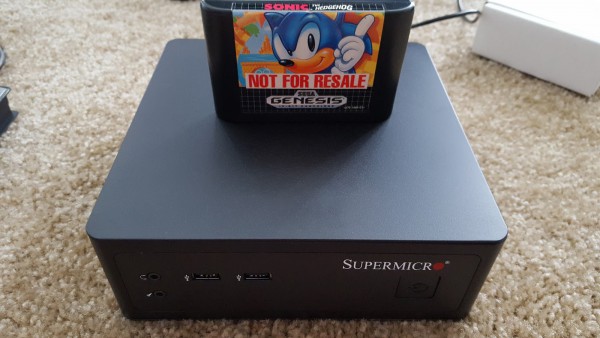 Yes... That my friends is a Sonic The Hedgehog Sega Genesis cartridge. As you can see from this picture, the case I selected for this build is smaller than a Model 2 Sega Genesis. I found the Super Micro case on NewEgg in the server case section. It's just about the exact size of a mini-ITX motherboard. You're not going to fit a high-end 125W APU in there without modification of the case. Let alone trying to get the power supply in order for such a small build. 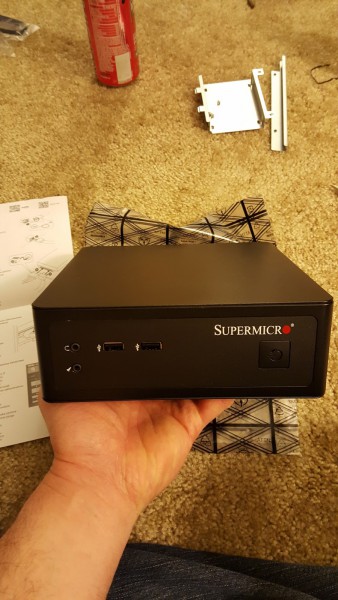 Its a fairly simple case with two USB 2.0 ports on the front. There is a slim 60mm fan on the side for an exhaust. The power button and the USB ports share a PCB that spans the width of the case along the very front. It's extremely compact and makes for a awesome little console!

I decided on using USB Super Nintendo controllers for the input. These work great and can be snagged off eBay rather cheaply. 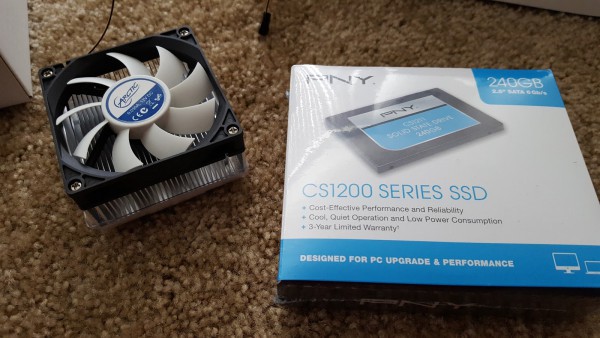 I swapped out the stock AM1 cooler for this better form Arctic Cooling. I had read the stock cooler can get on the noisy side. The Arctic is extremely quite and probably a bit overkill. For storage I was lucky to get this 240gb PNY SSD extremely cheaply off NewEgg. I think I paid $60 for it! 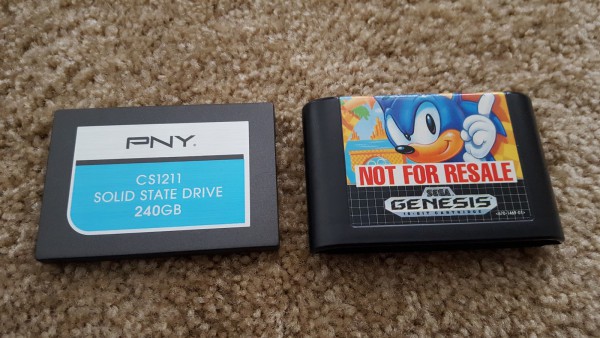 Amazing to think how far we have come in terms of storage too. The Sega Genesis cartridge is actually bigger in physical size, but pales in comparison in storage capacity -- 240gb on the left, 384k on the right! 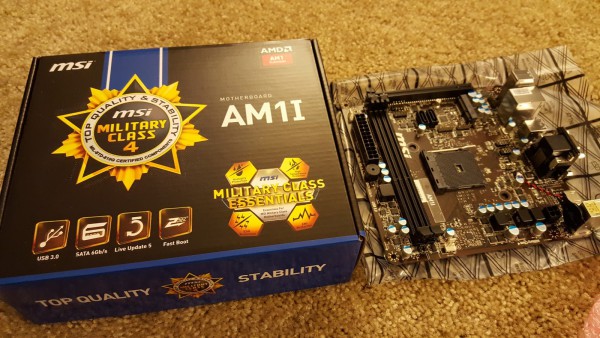 I must admit, I love me some MSI products and tend to use its motherboards a lot. For this build I chose its AM1i motherboard. It's a basic board but does offer HDMI out which is something I wanted to have. 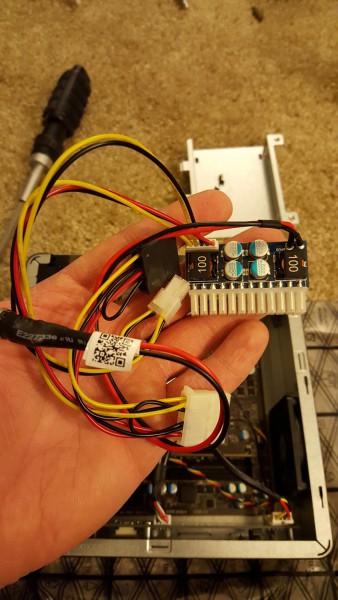 Powering this little beast can be tricky due to the space limitations. Obviously, you can't use a standard ATX power supply. A Pico PSU is a special PSU that makes use of a power brick to keep its size extremely small. They are great for such small builds and work fairly well. Cheap and effective, you can get them from online retailers like mini-ITX or eBay. 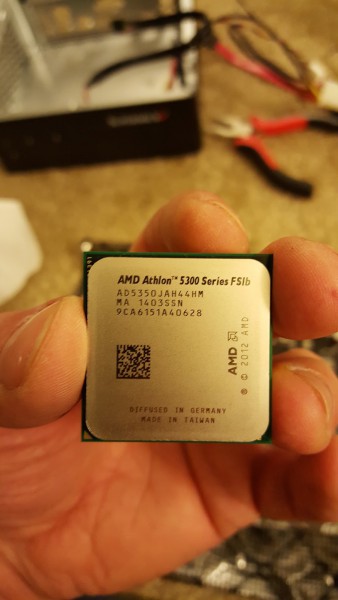 Taking a closer look at the AMD Athlon 5350 you can see it's a bit smaller than a typical CPU. My hands are not that of giants like they might appear in these photos. The APU is just on the smaller size. A quick look at the specs of this little monster: AMD Athlon 5350 APU: 25w with 4 CPU cores running at 2.05 GHz and 1 GPU core running at 600mhz. Created on the 28nm manufacturing process and sports 2MB of L2 cache. 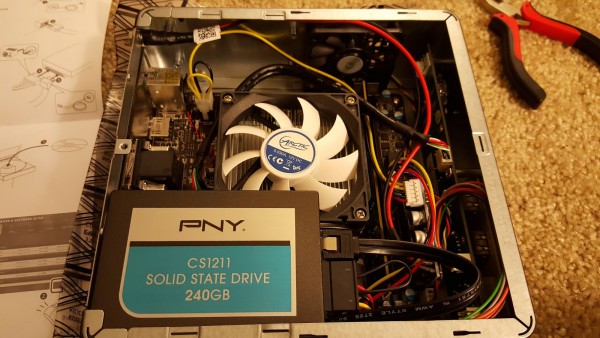 With everything installed, there is little room left. Just need to make sure the cooler gets proper ventilation through the exhaust fan. I used a single stick of 4gb DDR3 1600 memory. These AM1 APU's only make use of single channel memory, but it does not hinder performance.

For testing I ran a few emulators targeting the 32/64 bit era. For fun I threw in a run of Sonic the Hedgehog. This APU is more than enough to run NES, Sega Genesis, or Super Nintendo. The 32 bit systems and up are the more challenging systems to emulate. I'm pleased to report the AMD Athlon 5350 handles Nintendo 64 and PlayStation 1 games easily. I did not play around much with settings, but everything ran well. 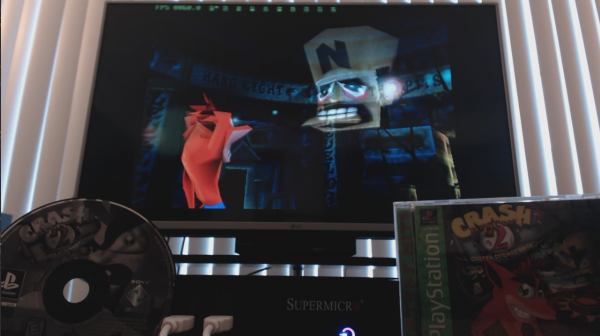 My PlayStation game of choice "Crash Bandicoot 2" did drop to about 57 fps in spots. But again no tweaking so I probably could have improved this. The games were running higher than the original systems' internal resolutions. So they were slightly enhanced, but I did not tinker with AA or AS settings. They looked and performed great on my 42" LED TV. Now I did shoot some video but I forgot to take pictures. 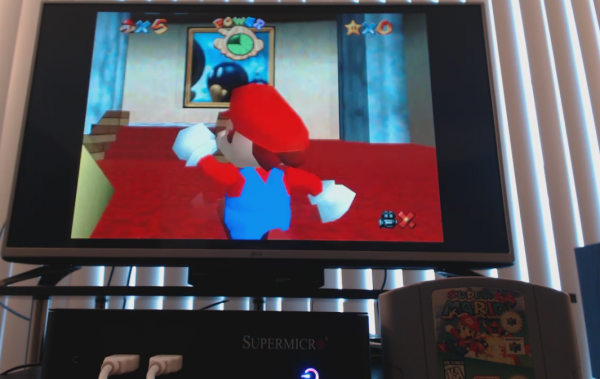 With console emulation it's extremely important to keep a solid 60 frames per second. If not the game will skip and stutter and not run how it did on the original hardware. With emulation everything runs as is on the regular hardware provided the emulation is proper. This means in-game slowdown is present just as it was on the original systems. But if 60 fps is not maintained, you experience added stuttering and skipping not found in the original. The games ran awesome though and kept a solid 60 fps except with the mention of Crash on the PS1. 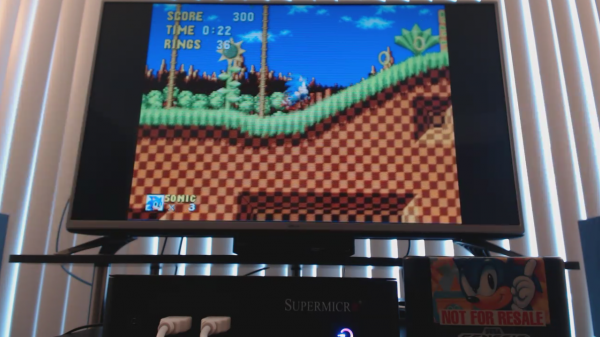 So I can conclude this APU is the perfect console emulator for a super small form factor. Currently it is about $45 on NewEgg. That is a insanely cheap price for what you are getting. This system cost around $250 total to build. Just think about that and remember you get a fully functional PC out of it as well. Just goes to show that bigger isn't always better. 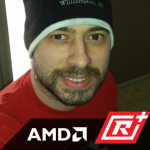 Dean Ellsworth has been into computers and gaming his whole life, from the early days playing on a Coleco Vision and Atari 2600, to killing demons on Mars in Doom on the PC. Gaming has always been a part of his being. He started messing with computers in his early teens. His family got a Intel 486 DX2 Packard Bell PC around then. One night he decided to be brave and take that computer apart while everyone was asleep. Luckily, he was able to resemble it and it booted up fine in the morning. That’s how his journey began and today he is a full-fledged geek who builds systems, arcades, even pinball tables and loves modding and playing classic games. He is a father with three amazing children. All of whom will probably end up as geeky as he is.