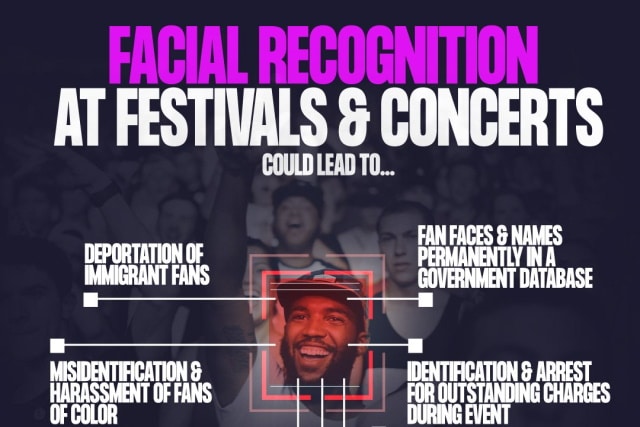 Digital rights and advocacy group Fight for the Future has launched a campaign protesting against the use of facial recognition technology at music events.

Big names such as Tom Morello, Gramatik and Amanda Palmer are backing the campaign which calls upon the likes of Ticketmaster to commit to not using the invasive surveillance technique at their festivals and concerts.

Numerous music event organizers have started to invest in facial recognition technology in the name of safety, but there are serious concerns about how surveillance footage could be used. There are serious privacy and security concerns associated with facial recognition in many walks of life, but the ability to link people to ticket sales at music events allows for even faster identification of individuals, and there are concerns about how footage might be stored as well as how it could be used in the future.

Evan Greer, deputy director of Fight for the Future, explains: "Facial recognition is one of the most authoritarian and invasive forms of surveillance ever created, and it's spreading like an epidemic. No amount of regulation can fix the dangers inherent in this form Big Brother automaton. We need to ban this technology outright, treat it like biological or nuclear weapons, and prevent it from proliferating before it's too late".

Facial recognition surveillance is uniquely dangerous. It doesn't keep fans or artists safe, it just subjects them to invasive, racially biased monitoring that will inevitably lead to fans getting harassed, falsely arrested, deported, or worse. We're calling on all artists to stick up for their fans' basic rights and safety by speaking out against the use of Big Brother style biometric surveillance at live music events.

Dresden Dolls singer Amanda Palmer is among those supporting the campaign:

people should feel safe & respected at shows, not subject to surveillance, harassment, deportation, or arrest. please join me and @fightfortheftr to tell @Ticketmaster & others not to use #facialrecognition at festivals and concerts https://t.co/vdIKF2hbKo #DontTrackFansAtShows

You can find out more about the campaign and add your name to the petition by heading here -- there are steps that music fans, artists and music venues can take.