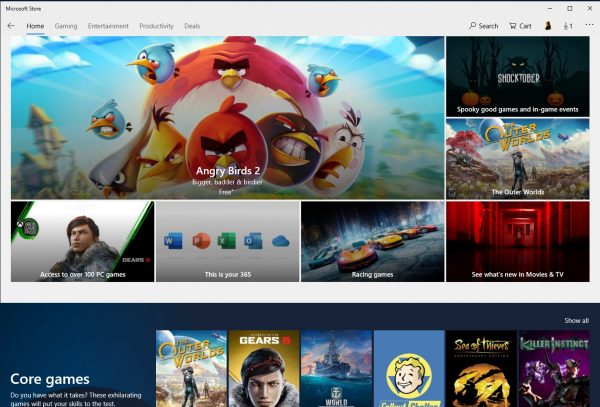 A new Microsoft Store layout featuring a new look and categories is rolling out now.

Windows 10 users who open the Microsoft Store on their devices may see the new layout already. It includes a new set of categories and reorganizes entire sections of the store.

These categories are not gone but some have been moved and others renamed. Movies & TV has been renamed to Entertainment, and Games to Gaming. Apps on the other hand has been moved to the Productivity category and Devices is now found under Gaming and Productivity.

Gaming lists gaming PCs and hardware, whereas Productivity has devices that are not specifically optimized for gaming.

Home displays the usual assortment of top apps and games as well as collections.

Gaming includes a selection of best selling and top free games, as well as personalized picks, a listing of new and noteworthy games, and PC devices and hardware. There is even a category for Xbox gear that you may purchase, and a selection of apps for gamers. Apps in that category include DTS Sound Unboxed, Dolby Access, or Nitrado. Some, like Spotify Music, feel misplaced.

Productivity focuses on applications even though you find devices and hardware categories under that category as well. It is not obvious that apps are found under Productivity in the new Store but most users may find the new home for apps after a few clicks on the various categories. The deals category has changed a lot. It features deals for games and apps as well as devices. Devices are further sorted into PC and Surface deals. Deals are also found under Gaming and Productivity.

The majority of listings provide no customization options. Users who want these options need to browse the Store on the Microsoft website as the options are provided there.

Edge extensions are nowhere to be found right now except when you search for extensions and select the "see all extensions" button that is displayed on the search results page.

The new Microsoft Store layout puts a stronger focus on devices and deals; these are found in various sections now which improves discoverability.

Now You: What is your take on the redesigned Store?

3 Responses to New Microsoft Store layout is rolling out