The Google Translate application for Android may now be used to transcribe speech; the new functionality allows anyone to "transcribe foreign language speech as it's happening", according to Google.

Recently, I was at my friend’s family gathering, where her grandmother told a story from her childhood. I could see that she was excited to share it with everyone but there was a problem -- she told the story in Spanish, a language that I don’t understand. I pulled out Google Translate to transcribe the speech as it was happening. As she was telling the story, the English translation appeared on my phone so that I could follow along -- it fostered a moment of understanding that would have otherwise been lost.

The transcribe functionality has been added to Google's Translate app for Android. The application supports text, image and voice-based translations already.

Google notes that the feature will be rolling out to all users of the Translate application in "the next few days". It will only be available for combinations of the following eight languages at start: English, French, German, Hindi, Portuguese, Russian, Spanish and Thai. 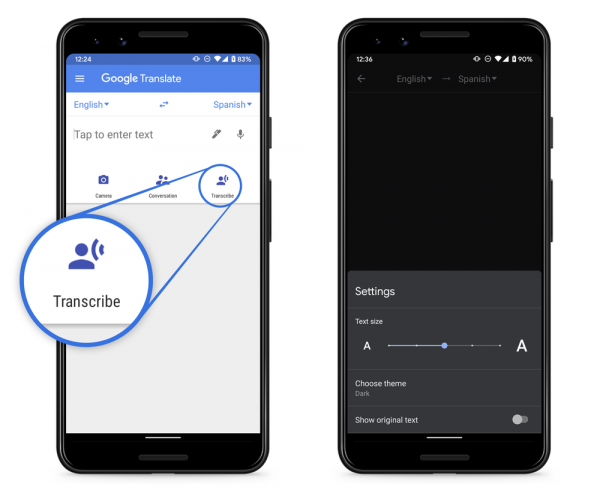 A new "Transcribe" icon should be visible in the application after the update. A tap on the icon and the selection of source and target languages is all that is required to start the process. Users may select pause or restart at any time.

The original transcript is available and there are options to change the text size or theme (dark theme is supported) from the settings menu.

The new transcribe feature works best in "a quiet environment with one person speaking at a time" according to Iqram.

Conversation mode, another feature of the Translate application, remains available and should be used for conversations with two participants.

Google plans to improve the transcribe functionality in future updates. The company did not reveal plans to extend the feature to other languages.