There are a myriad of both subtle and fundamental differences in the basic architecture of Windows Server 2008, which could dramatically change not only the way it's used in the enterprise, but also the logical and physical structure of networks where it's the dominant OS.

The abilities to consolidate servers, to manage hardware more effectively, to remotely manage hardware without the graphical traffic, and to radically alter the system security model, could present a more compelling argument for customers to plan their WS2K8 migrations now, than the arguments for moving from Windows 2000 to Server 2003.

Based on the information we gathered last week at WinHEC 2007 in Los Angeles, we decided that rather than list a bunch of mind-jarring new categories and marketing terms that sound like rejected gadgets from the Bat-Cave, we'd select what we believe to be the ten most influential and important new technologies to find their way into WS2K8, with the help of Microsoft software engineers such as Mark Russinovich to explain their relevance. We begin at the end with our #10 entry:

#10: The self-healing NTFS file system. Ever since the days of DOS, an error in the file system meant that a volume had to be taken offline for it to be remedied. In WS2K8, a new system service works in the background that can detect a file system error, and perform a healing process without anyone taking the server down.

"So if there's a corruption detected someplace in the data structure, an NTFS worker thread is spawned," Russinovich explained, "and that worker thread goes off and performs a localized fix-up of those data structures. The only effect that an application would see is that files would be unavailable for the period of time that it was trying to access, had been corrupted. If it retried later after the corruption was healed, then it would succeed. But the system never has to come down, so there's no reason to have to reboot the system and perform a low-level CHKDSK offline." 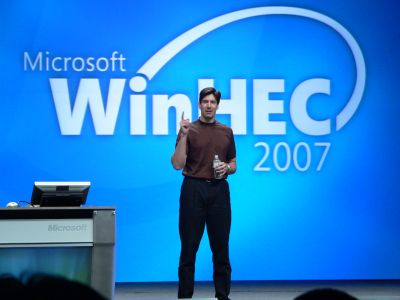 #9: Parallel session creation. "Prior to Server 2008, session creation was a serial operation," Russinovich reminded us. "If you've got a Terminal Server system, or you've got a home system where you're logging into more than one user at the same time, those are sessions. And the serialization of the session initialization caused a bottleneck on large Terminal Services systems. So Monday morning, everybody gets to work, they all log onto their Terminal Services system like a few hundred people supported by the system, and they've all got to wait in line to have their session initialized, because of the way session initialization was architected."

The new session model in both Vista and WS2K8 can initiate at least four sessions in parallel, or even more if a server has more than four processors. "If you've got a Vista machine where this architecture change actually was introduced, and you've got multiple Media Center extenders, those media center extenders are going to be able to connect up to the Media Center in parallel," he added. "So if you have a media center at home, and you send all their kids to their rooms and they all turn on their media extenders at the same time, they're going to be streaming media faster from their Vista machines then if you had Media Center on a XP machine."

#8: Clean service shutdown. One of Windows' historical problems concerns its system shutdown procedure. In XP, once shutdown begins, the system starts a 20-second timer. After that time is up, it signals the user whether she wants to terminate the application herself, perhaps prematurely. For Windows Server, that same 20-second timer may be the lifeclock for an application, even one that's busy spooling ever-larger blocks of data to the disk.

In WS2K8, that 20-second countdown has been replaced with a service that will keep applications given the signal all the time they need to shut down, as long as they continually signal back that they're indeed shutting down. Russinovich said developers were skeptical at first about whether this new procedure ceded too much power to applications; but in practice, they decided the cleaner overall shutdowns were worth the trade-offs.