One of Microsoft's most ambitious new projects is taking off more rapidly than many expected, perhaps due to popular demand. Windows Home Server -- one of the stars of WinHEC last month and a surprise standout at TechEd last week -- has officially moved to Release Candidate 1 status.

Essentially, WHS is a retooled Windows Server 2003, with new services including one that pools multiple hard drive spaces together as an easier-to-manage partition, and browser-based management software whose ambitious goal is to be easy enough to be understood by the same guy who loses his remote under the couch every week.

To understand what this new operating system really is, you need to take a good look at the kind of computer that will be running it. The best look we've received thus far is a peek at AMD's and Gigabyte's jointly produced reference design kit (RDK) motherboard, code-named "Churchill," which was also seen in Taipei at Computex last week.

AMD gave us our first peek last month at WinHEC in Los Angeles. Factor in the size of the CPU socket in this shot, and you'll understand a home server device isn't supposed to be much larger than the span of your own hand. 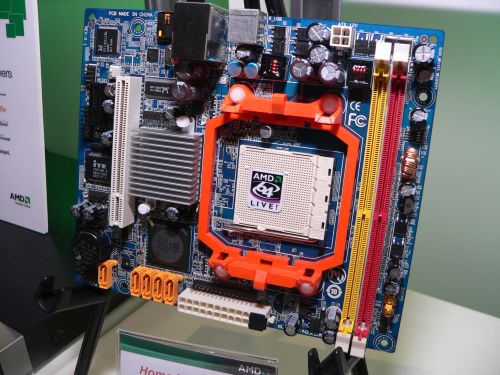 This is the Mini-DTX form factor currently suggested for WHS systems, although technically you could install the OS on any computer. There is clearly a PCI-Express connector on the left - and if you look really closely, you'll also find a header for an old-style VGA connector - but a real Home Server box is designed to be "headless." There's no serial or PS/2-style I/O for an old-style keyboard or mouse, but you could plug in the modern USB variety through the silver dual-plug box on the top.

But the idea is for this box to drive the throughput of data (mostly audio and video) to other computers in the home, as well as to your Xbox 360. So an extra monitor would be a waste of space, except when you're trying to install the operating system on this system for the first time - in which case, AMD's designers discovered, having at least a VGA plug can be really handy.

Because this box is designed to drive media, there are five (5) SATA connectors along the bottom. Here is where the reference design is facing its biggest challenge - one compounded today by the fact that WHS has just entered RC1: 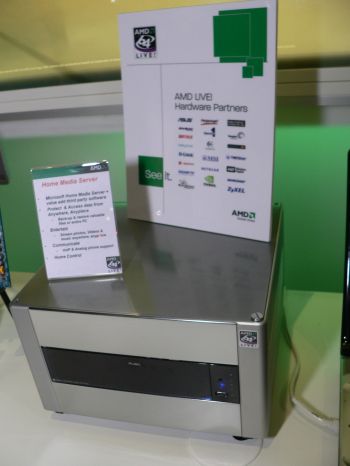 It isn't exactly clear what a Home Server box should look like yet, or how much real estate it should plan to consume. AMD conceded to us at the time we took these pictures that some in the company don't like the "toaster" look of the first prototype system cases, such as this one. (I suggested as a joke that they take a slice of toast, cut it into two pieces, and glue them to two pieces of black construction paper taped in strips over the top. The response I got suggested they might have even tried it if Computex didn't go over well.)

If you've ever built a system, you already know the problem: Put five hard drives into a small box, and you really do have a toaster. What's more, this little component doesn't really have space for that many storage units, let alone a sufficient cooling mechanism. A few weeks later at Computex, vendors including AMD were displaying longer, more upright prototype cases with space for more hard drives. But with sizes approaching standard mini-towers, the benefits of the small motherboard aren't as obvious...unless you take into account that it gives more room for a water-driven cooling system.

Microsoft is leaving the solution to this challenge to system builders and CPU manufacturers, while it concentrates on the equal challenge of how to make such a system approachable by an everyday, casual user. Last month, the company issued what's being called its Code2Fame Challenge: a clarion call to independent software developers to come up with add-ins that will make WHS easier to manage, with champions in each development category receiving as much as $10,000.

T-shirt giveaways alone can attract a crowd; the chance to win ten grand can bring on a throng. Last week at TechEd, developers who had no idea this was becoming a hardware show, flocked Windows Home Server demonstrations, many of which had to be repeated twice due to standing-room-only conditions that could have alerted the attention of the local fire department. (Talk about toasters.)

With one-terabyte drives now in the consumer market (although the first Hitachi models have shown less-than-stellar performance in their first tests), it's possible for a WHS box to drive five terabytes of storage. Handing that kind of power over to an ordinary joe could be a recipe for flooding one's call centers.

So as Microsoft lead developer Chris Gray demonstrated last month at WinHEC, his team is trying a new approach to partitioning. WHS has about a 20 GB footprint, which is smaller than WS2K3, but still fairly sizable. To protect the operating system, its logical C: partition will be kept small. The remainder of the real estate on the first drive in the sequence will then be pooled together with all the space on the remaining drives, to create one big logical D: partition.

This would be the partition breakdown, without the consumer being given any other options. This way, in case of data loss, he can insert a system restoration DVD into the optical drive (another big space consumer in systems) which runs scripts that can analyze and rebuild data on the D: partition, as well as restore operating system services to the C: partition. If C: becomes corrupted, Microsoft is experimenting with installing 512K images of its Windows PE diagnostic system (which premiered with Vista) into a standby flash component built into the server box. The user could trigger Windows PE in an emergency by pressing a small button, perhaps recessed into the bottom of the box so it can't be triggered accidentally by a furious consumer, or by the cat.

What should an end user expect to pay for a WHS-equipped server, once it first becomes available? In a WinHEC interview with WHS group product manager Joel Sider, I threw out a number: $800, to see whether he'd play the old "Price is Right" game of "Higher or Lower" with it.

We didn't hear "lower." "A lot of that [pricing formula] will depend on storage capacity," Sider told us, "but certainly well south of $1000. Think about the price range of a low- to mid-desktop PC.

"This is some of the things we've had some interesting conversations about with our focus group participants: How much are your digital memories - which are really just your memories - [worth]?" he continued. "It's not just our digital life, it's our life. How much are your wedding photos and your children's home videos and the photos of your daily life, worth to you? A lot of people answer, an incredible amount. Well worth the investment in something that's going to give me that piece of mind, and know my systems are backed up, I'm never going to lose an invaluable photo or video or piece of music, I know we can all get to it, we can share it, we can participate in it together, and I can get to it from anywhere."

Microsoft is still promising general availability of WHS, and the systems which it would run on, "later this year."