At the start of AMD's semi-annual technology analyst day conference, president Dirk Meyer and VP of marketing Henri Richard set the tone for the day-long session by toning down even further the relative importance of performance, including among consumers.

"No longer do we hear that it's all about performance," said Meyer during his opening remarks. Instead, the three pillars of the company, as he perceives them, are power efficiency, providing the optimum visual experience to customers, and thirdly, something of a surprise: affordable Internet access, including to emerging markets. This may come as a shock to customers and investors alike who never considered AMD an ISP.

Richard picked up that theme later, adding that he felt the second pillar - "Ultimate Visual Experience" - is critical to the new AMD. This is true for business as well, he explained, where videoconferencing is becoming a more critical application. "We're not just doing slides and calculating spreadsheets," he said.

1:33 pm July 26, 2007 - Performance is an element that cannot be played down in the server space. Since the first news of AMD's forthcoming Barcelona quad-core architecture has been released, there's been considerable controversy over its performance claims, particularly whether the company is cherry-picking some performance numbers and either glossing over or selectively omitting others. 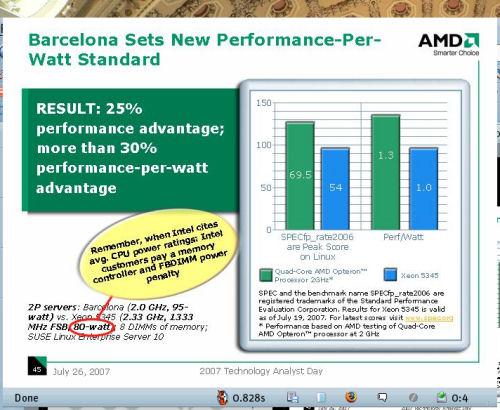 So there will be considerable examination and re-examination of AMD's current comparison of choice: In this case, the company chose a measurement of floating point operations peak throughput (as opposed to raw speed) for a 2P Barcelona 2.0 GHz quad-core based system (eight cores total). In this case, AMD yielded a relative score of 69.5. AMD then compared this figure against a SPEC report for an unnamed Intel Xeon E5345-based, 2.33 GHz quad-core based system, with a peak score of 54. BetaNews located one such system in SPEC's database this afternoon: a Bull SAS NovaScale R460. So this figure does appear to be current.

Had AMD chosen to cite the score for the R460 running at 2.0 GHz -- the same speed as the Barcelona -- that Intel-based system's peak score would have been 42.4. So the margin in AMD's test is narrower, though the company does get the opportunity to say its 2.0 GHz system outperforms a faster-clocked Intel-based system.

Much better performing Intel-based systems do exist; however, they're clocked at much higher speeds. However, they're four-processor dual-core systems rather than two-processor quad-core systems. For instance, SPEC reports a Bull SAS NovaScale R480, using four Xeon 7140M processors at 95 watts, clocked at 3.4 GHz, with a peak SPECfp_rate score of 72.5. In terms of raw performance per watt, the 7140M-based system would score 3% better at 95 W than the Barcelona system at 95 W...provided you're willing to overlook the fact that you're running four processors instead of two. The Bull SAS quad-core system AMD chose to compare against uses 80 W.

But AMD's Randy Allen again reminds customers that Intel-based systems may still consume more power, by virtue of using more "power hungry" memory, and by using a separate memory controller that also uses its own power. While 65nm Budapest architecture quad-core processors will be available for workstations and servers in the second half of this year, Meyer confirmed today, clock speed is not being mentioned, although he did say a Barcelona-based server was on display for analysts to witness for themselves, at an overclocked speed of 3.0 GHz.

This brings up an important problem going forward: If AMD stays safe in the 2.0-2.66 GHz range for Opterons going forward, it may be able to compete point-for-point against Intel at that level, though it could get outperformed at higher clock speeds.

"This was not meant to imply AMD is going the route of an ISP," the spokesperson told us. "Rather AMD is continuing to focus efforts around developing and promoting affordable, power efficient solutions for emerging markets. This effort is called 50x15, a global initiative founded by AMD, which aims to enable affordable, accessible Internet connectivity and computing capabilities for 50% of the world's population by the year 2015. Among the programs under 50x15 is AMD's involvement in the One Laptop Per Child program out of MIT that you are likely familiar with."

5:05 pm ET September 11, 2007 - In a statement to BetaNews this afternoon, a representative of SPEC told us that an estimate of 69.5 for AMD's SPEC performance that appeared in this story, was not properly labeled as an estimate and was cited as actual SPEC results.

"According to the SPEC CPU2006 license, if numbers are actual results," said SPEC media relations director Bob Cramblitt, "then whoever provides the numbers must be able to provide a full-disclosure for the results; otherwise, the results must be labeled as estimates."