In a heartfelt plea to a conference on IT corporate responsibility for the environment, Zimbabwe's UN ambassador urged more must be done to help modernize countries such as his, so that they can participate in the effort to save the planet.

UNITED NATIONS (BetaNews) - Zimbabwe has a staggering 87% nationwide literacy rate. You read that correctly; it's among the highest in all of Africa, and its youth literacy rate is even higher. But the true miracle there is that technology plays so little of a role in that success, said Ambassador Boniface G. Chidyausiku to a UN conference of IT industry leaders in New York City this afternoon.

As a result, a potentially powerful braintrust for not only ideas but real strategies on how to solve the global climate problem, Amb. Chidyausiku made clear, is being wasted essentially for lack of bandwidth. What Zimbabwe and other African nations need, he said, is a "technology transfer."

It would be nice if his country could produce a study on the effect of its urban infrastructures on the environment. Zimbabwe knows all too well the effects of deforestation, as it now suffers from the worst drought it's faced in over two decades -- caused in part, most likely, by fewer fauna to help contribute moisture to the atmosphere. That brings lake levels down, which contributes to fish dying, which diminishes the food supply, and thus leaves the country so vulnerable. 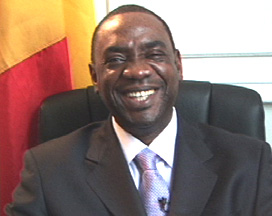 But it's the very state of Zimbabwe's infrastructure, Amb. Chidyausiku said, that prevents his country from being able to rise to the occasion -- to participate in any serious study on its own behalf. A technology transfer that would, for instance, provide Internet access of any sort to rural areas would make feasible a study of carbon emissions within those areas, conducted by personnel who could report their findings in real time.

Of course, that kind of access requires not only connectivity but electricity. And so much of the ambassador's country remains without regular power, especially at night, he said.

The ambassador's comments brought a hush to the UN audience this afternoon. Afterward, there wasn't much that could be said -- and sadly, not much that it appears can be done right away. The response came from conference moderator Mike Lackey, president of the global educational trust AIT Global: "We know that energy and a reliable Internet is a problem [in third-world countries]," Lackey told the audience. "We all need to get together on this."

The event comes just a week after the last white colonial prime minister of Zimbabwe's predecessor country Rhodesia, Ian Smith, died in South Africa at age 88. It was Smith who had vowed to fight Great Britain from releasing his country from the British Commonwealth, in the move that made Zimbabwe an independent nation in 1979.