Motorola announced today that it will be showing off a new mobile media player at CES 2008 in Las Vegas next week that also acts as a mobile DVR.

The 4.3 inch screened DH01 will show live television, on demand video clips and DVR programming at 25 frames per second. According to Motorola, the device has a 5-minute memory buffer that allows for pause and replay functions on live television broadcasts.

In order to receive content, the DH01 supports DVB-H (Digital Video Broadcasting-Handheld), a new TV standard that is designed specifically to work on battery-powered, handheld receivers. Similar to the MediaFLO standard upon which Verizon bases its VCast TV service, DVB-H is supported mostly by European companies, while Asian companies have shown greater support for competing standard T-DMB.

Conveniently, one of the only three cities in the US that have a trial DVB-H infrastructure is Las Vegas.

The Netherlands is expected to have nationwide coverage before the end of Q1 2008, while Austria, France, Germany, Spain and Switzerland are expected later in the year. For a list of areas with trial and full service launches, visit dvb-h.org.

Motorola's DH01 is reported to have 4 hours of playback time with its rechargeable battery. Recorded programs can be stored on SD memory cards. BetaNews will provide more details of the device during CES next week. 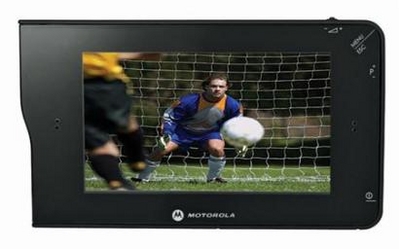