The developers of a Web services application environment that leverages the leased computing services of Amazon have reworked their Web functionality to incorporate Adobe's Web language for Flash applications.

Already, the Coghead system was designed to enable businesses to create database-driven services using Amazon's existing Web services platform, called EC3. That platform opens up a library of functionality for businesses to lease on a bandwidth-per-hour basis, giving small businesses a way to use a very-high-bandwidth server -- Amazon's -- to host their applications even when they don't have servers of their own. 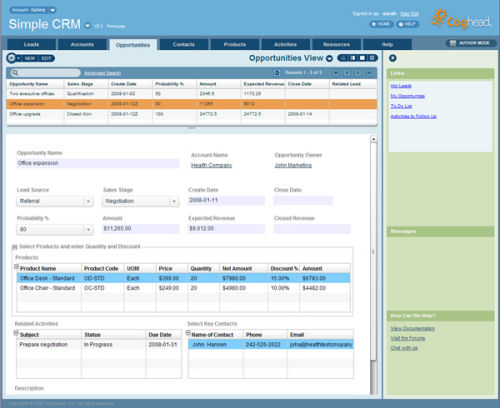 The types of applications one would build with Coghead are essentially the same type one would make with Microsoft Access: apps that utilize a database on the back end and that use entry forms as their front end. Those forms contain graphical gadgets which most people now know how to use, and which are bound to fields in the database. Small snippets of logic respond to certain entries in the form to trigger actions that are specific to the program or to the business. In Coghead's case, that logic is rendered using graphical flowcharting, with common symbols most will recognize without too much explanation.

Coghead offers a basic set of pre-configured applications, such as customer relationship management and project management, that can be customized for business' exclusive purposes without additional fees.

But one principal difference between an Access application and a Coghead application that does the same thing, is that with Coghead, you're running it on Amazon's servers rather than your own, in a location that Amazon describes as "the cloud." You pay Coghead a monthly usage fee whose minimum is $49 per month for five users with 25,000 records and 250 MB of storage, plus $10 per month for each additional user and additional charges for extra records and bandwidth. So obviously you're not deploying these applications for a retail storefront.

Another big difference is that Flex makes the runtime portion cross-platform.

"Out of the box we support all common Web browsers: IE, Firefox, Safari, and many more," reads a statement posted to Coghead's company blog this morning. "Flex is also a highly productive development environment. This means that we can deliver features faster in the future. Flex also gives us a really polished and rich UI. Adobe is the master of look and feel, and with Coghead 2.0 you'll immediately notice a difference in the usability of the system. And finally, by adopting Flex, we're setting ourselves on an optimum path to adopt Adobe AIR in the future."

The AIR platform, the developers said, will enable Coghead applications to run offline. No timetable has yet been given for when that part of the package will go live.