Yahoo Live, the search company's new live cam site, underwent what you might call an "experimental" launch last night. If the Greeks ever considered a letter that could come before "alpha," this might have been the time to use it.

While similar to the host of webcam sites that already exist, such as Ustream, blogTV, mogulus, Stickam, and justin.tv, it can be said that few have garnered as much attention as Yahoo Live has in such a short time with so little pre-launch hype.

News of the "social broadcasting" site came through the Yahoo corporate intranet a scant few weeks ago, announcing the project internally, but ultimately not confidentially.

In that post, Yahoo noted that since the service is still in development, it may undergo outages. On its first night open to the public, amid scheduled performances, it indeed went down. This was attributed to higher-than-capacity traffic surges, but Michael Quoc said in the Y! Live blog that the team has identified some "key improvements we need to make" in order for the site to run smoothly.

He also noted in closing that the tiny six-person team's mantra is: "To iterate and build with the community, as opposed to unveiling The Next Big Thing on Day One."

Webcam broadcasts have existed for almost 20 years, and have come a long way since Cambridge University's Trojan Room Coffee Machine cam. Yahoo Live is arguably the first "brand name" cam site, where users can create their own cam services with the available API. 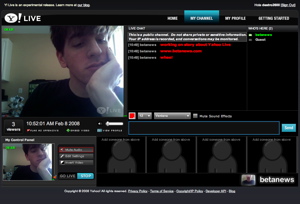