Google tries to make its spreadsheets more like wikis

In a strange move, Google has added a new feature to Google Docs that enables users to allow anyone to edit a spreadsheet, advertising the option as a way to make a spreadsheet like a wiki.

Previously, individuals could be invited to view or edit a spreadsheet, but they had to create an account with Google after entering a custom URL that effectively served as a security-through-obscurity barrier.

Google Spreadsheets users simply need to know the URL of the document to be edited. Simply loading that URL provides full access to edit and add content as if they were logged into Google Docs. For now, the feature remains only for spreadsheets and not written documents or presentations.

Those with security concerns simply must ensure the "Anyone can edit this document without logging in" button is not checked. By default, the option is disabled.

What's not entirely clear from Google's announcement, however, is why anyone would want to turn the option on. While publicly editable wikis are commonplace around the Web, spreadsheets aren't typically the type of document that necessitates such open collaboration. The feature isn't yet part of Google's online word processor, which was actually developed by another company that Google acquired.

Google's example spreadsheet comparing productivity services and software was quickly defaced by the public. Under "Most Annoying Feature" of Google Docs, someone added "Offline use doesn't work."

Google added offline editing capabilities to Docs recently with the help of its Google Gears software, but users have had problems making it work properly. The document is downloaded for local editing and then synced back to the service, but changes are not tracked for approval or disapproval.

Separately, Google also this week added the ability to embed forms into a Web site and pass the result back to a spreadsheet.

Another recent addition is the option to save Google Docs presentations as PowerPoint (PPT) files, which joins saving documents as text and PDF files. Mobile viewing on cell phones is now also possible by visiting docs.google.com/m. 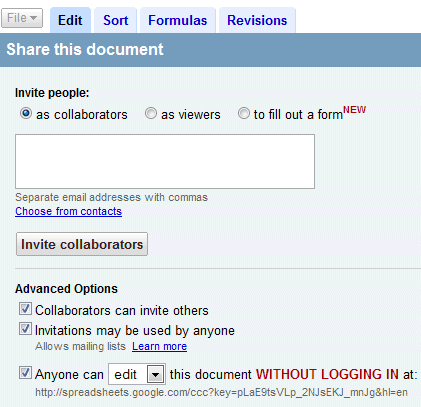