Microsoft's history of business transactions during its attempt to acquire and merge with Yahoo, a presentation to Yahoo shareholders will argue, imply that its business goals may have been to weaken Yahoo rather than strengthen it.

Slides from a Yahoo presentation to shareholders that will likely be given during its shareholders meeting on August 1 in San Jose, submitted in advance to the US Securities and Exchange Commission in accordance with law, will make the case that the company's board of directors doubt Microsoft had any serious intention to fully acquire and merge with Yahoo.

One slide's bullet points allege that after Microsoft made public its original $31-per-share tender offer on February 1, it actually was unresponsive to Yahoo's repeated requests for negotiation. Meanwhile, Microsoft publicly threatened to pull out of negotiations unless it got a response of some sort from Yahoo -- this while Yahoo was making, it says, diligent attempts to do just that.

Microsoft "only orally indicated [a] possible increase in price after several months of discussions," the slide alleges. It then raised its offer by "'a few' more dollars" (note the quotation marks around "a few," as if to cite Microsoft's language), followed by "'a couple' more dollars per share;" and then publicly suggested it would raise its offer after it actually had already done so -- if you accept "a few" or "a couple" as an official raise. Then, the slide says, Microsoft withdrew that offer, replacing it with a "hybrid" transaction where it purchased Yahoo's search business outright. A boldface caption on the slide reads, "The record casts doubt on whether Microsoft was ever committed to a whole company acquisition."

A later slide makes the case that Microsoft was incapable of doing the math with respect to its proposed hybrid deal, which was touted as a prospective buyout of Yahoo's search business. Yahoo's interpretation of Microsoft's proposed terms would suggest it was something less than that.

According to the slideshow handed over to the SEC, Microsoft offered to pay $1 billion to enter into a search partnership, in which it assumed control of "search assets." This was apparently confusing to Yahoo, which had already implemented a complex technological reorganization through its Panama program, commercially called AMP, in which merged its display advertising platform with its search platform. For Yahoo, search and display are now the same asset; Microsoft insisted the two were separate, according to Yahoo.

"Yahoo would be left without any search assets," the slide explains. "Not owning search assets (including algorithmic search) would jeopardize the Yahoo user experience and make it difficult for Yahoo to maintain search and display volume."

As Yahoo goes on, the two companies would have entered into a ten-year contract, during which Microsoft would agree to pay 70% of the traffic acquisition costs (TAC) for the search platform -- the cost of doing business. Microsoft would calculate TAC, Yahoo says, by assessing net revenue of traffic delivered by Yahoo search to Microsoft's content and advertising.

But that meant Yahoo would have been responsible for 30% of TAC, and its financial team estimated -- also according to the slideshow -- that this expenditure would have completely usurped any cost savings Yahoo could have realized under Microsoft's plan, assuming Microsoft was completely in charge of creating and implementing that plan. Yahoo estimated those savings to be $750 million annually; Microsoft had projected them at $800 million.

Microsoft offered, the presentation continued, to pay 125% of the price-per-click (PPC) that Yahoo normally receives managing search advertising on its own. But that guarantee lasted for only three years, Yahoo complained, not for the full ten-year term of the agreement. Plus, Microsoft's offer was not based on a more modern revenue-per-click (RPC) model; thus, Yahoo argued, it would have been totally dependent "on Microsoft's ability to build and maintain the marketplace" -- a level of trust it wasn't willing to extend.

Interestingly, one of the terms of the deal was that Microsoft would have veto power over any change of control of Yahoo, preventing anyone else from acquiring control of the company -- theoretically including Icahn Partners, which is leading the current alternate proxy campaign. 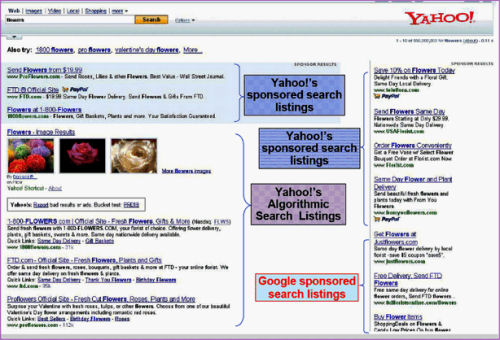 A later series of slides attempt to make the case for why Yahoo's text ad partnership with Google was a better deal overall. It shows what it describes as a mockup of Yahoo's search page prior to the addition of Google's sponsored search listings, and the same page after. They are exactly the same screenshot, only the markup is different, apparently to illustrate that the Yahoo user would see no visible difference.

The Google deal is superior to the Microsoft deal, Yahoo goes on to argue, because it leaves Yahoo in full control of its search business, with the ability to maintain control over its user experience and query volume, and cedes no control of its board.