Livescribe's audio pen computer on its way from Windows to Mac 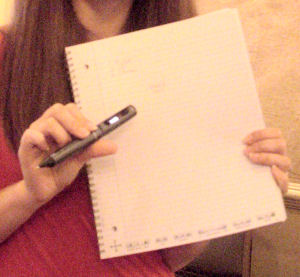 Livescribe's microprocessor-embedded, audio-enabled digital Pulse Smartpen -- an upcoming gadget that made its first bow at Demo earlier this year -- is now expanding its reach, with an Apple SDK already in the works.

NEW YORK CITY (BetaNews) - The fancy new pen uses the same dot-laden paper as the Fly pentop computer produced by LeapFrog, a company where Livescribe founder Jim Marggraff used to be a top exec. The higher-end Pulse Smartpen also comes with two microphones, along with an application called Paper Replay which records what it hears while you're writing on the school-ruled digitized notebook paper.

In a demo at a Samsung press event in New York City in June, BetaNews saw how you can use Paper Replay to play back what was recorded from when you first started writing in the notebook. You can also use a printed toolbar within the notebook to pause, rewind, slow down, speed up, or fast forward the audio recordings. Another feature of the Smartpen does audio searches.

The initial Windows-based edition of the Smartpen has been targeted for release this fall. But during this week's Digital Life press preview here, a Livescribe spokesperson said the company actually now foresees a stronger market on the Apple side, due to anticipated uses of the sound-capable digital pen-and-paper set among college students and creative pros, a couple of long-time Mac strongholds.

The spokesperson told BetaNews that a recent appearance of Livescribe at JavaOne helped draw responses from more than 1,200 interested Macintosh developers.

"You can already run this [in emulation] on [desktop virtualization software from] Parallels. But we will also be doing a full Macintosh version," she said.