After relaunch, AOL's Propeller not so Digg-like anymore

AOL's social news property Propeller, which began as a part of Netscape.com revamp headed by Internet entrepreneur Jason Calacanis, has been re-designed and re-launched under the same name.

Besides the nuclear-age design ethic upgrade, the service has scrapped its old ranking system entirely. Formerly, it worked like Digg and Yahoo Buzz, where a story's ranking was determined strictly by the number of votes it had.

Now, stories are rated on a 1 to 10 scale of popularity, with 10 being the highest. "Voting" has become "propping" (sort of similar to Digging or Buzzing up a story).

Propeller has struggled since its inception on Netscape.com, as more traditional readers balked at the social news aspect of the site As a result, in 2007 Propeller moved off of Netscape.com and was given its current name, while Netscape moved back to its own AOL sub-page as a general editorial-driven news site.

The launch was initially intended to capitalize upon Netscape's brand name combined with the popularity of Digg, but did not prove to be the success envisioned by Calacanis and AOL.

Now on its own domain, with its own discrete identity and free from the brands of companies on the wane, AOL hopes Propeller may finally be ready to take off. 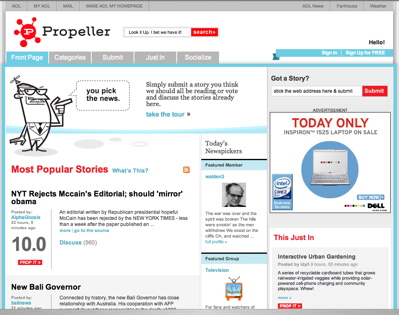 One Response to After relaunch, AOL's Propeller not so Digg-like anymore