In a move which could end up meaning either everything or nothing, the developers of a "lifestreaming" application have agreed to be acquired by a company whose track record with acquisitions hasn't always been pretty.

Confirming news that had first been leaked to TechCrunch two weeks ago, the CEO of a startup social network service called SocialThing -- which has yet to emerge from private beta -- blogged yesterday that his company is a few days away from being fully acquired by AOL.

"Being acquired at such an early stage is a pretty good validation that we are onto something really hot," wrote SocialThing founder Matt Galligan. "But beyond all of that, at the end of the day, we just wanted do something that was both beneficial to us, and our users."

Exhausting the readily available supply of hyperboles, SocialThing has been termed a lifestreaming application. Essentially it's a network of networks, enabling events that take place on a variety of other networks to which users may subscribe, to be pooled together and centralized on a single feed. It doesn't substitute for Twitter or Facebook or Pownce or even, most recently, the Guitar Hero gathering site, but rather condense their events into a kind of automatic blog that lets users see what their friends are doing on those and dozens of other services.

As social network enthusiasts will point out, AOL already has its own "lifestreaming" service, called FriendFeed. Like SocialThing, it tracks the events of one's friends and provides a little stream of those activities. However, SocialThing is designed in such a way as to promote the further use of these social sites, rather than substitute for them. 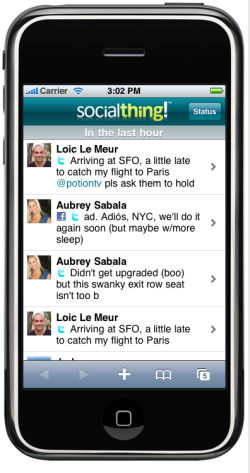 As Galligan admitted to followers, he's naturally excited about the rapid influx of money his venture is certain to receive from its absorption by AOL. But what also intrigued him about making the deal appears to have been an opportunity to extend the reach of his product, and perhaps its trademark as well, to an already well-cultivated territory of the desktop: instant messaging.

As Galligan added, "We have a really cool opportunity ahead of us to integrate into some other AOL products that might change the way you see social aggregation. AIM is a really big target for us, both on the aggregation and on the publishing side, so you can imagine how excited we are to be able to work alongside the team."

Integrating social contacts with instant messaging is a very intriguing notion, though as some may argue, the notion could conceivably be antiquated. Just last week, during SocialThing's latest round of software updates, the group added to its long list of supported services Ping.fm, whose principal function is to simultaneously relay short messages to users of as many as 17 other social networks, including MySpace and Facebook. As long as SocialThing already supplies the contact service for heavy social network users, the role of conventional IM in that environment may be questionable.

One Response to Latest AOL acquisition could pair SocialThing with AIM