Where does John McCain stand on technology issues?

With over two decades in the Senate, John McCain of Arizona has developed quite the resume with respect to technology legislation. BetaNews' Ed Oswald takes a look at where McCain stands on some of the most high-profile issues.

Perhaps simply because he is 72 years of age, Sen. John McCain is often the brunt of jokes that presume he knows little or nothing about modern technology, consumer electronics, or the Internet. Yet McCain's record tells a different story.

As a 22-year veteran of the US Senate, including six years spent as chairman of the Commerce Committee and having also chaired its Science Subcommittee, the senior senator from Arizona has taken leading positions on a multitude of technology-related issues. Legislation authored or sponsored by McCain has had significant impact on this country's citizens, and among the most important of the technology causes he championed has been the digital television transition.

An architect of the DTV transition

The nation's switch from analog to digital TV was supposed to be inevitable, but Congress had a terrible habit of postponing it indefinitely. This habit quite literally (and the photographs exist to prove it) made Sen. McCain red with fury. The process of finally setting a hard date finally started in 2004, when McCain cleverly tied the need for a transition to the need for first responders to have access to uniform public safety frequencies in the event of an emergency.

McCain's push to make the transition a reality was driven by a desire to free analog frequencies so they could be used by public safety officials. In 2005 he attempted to move up the transition date by two years to April 2007. 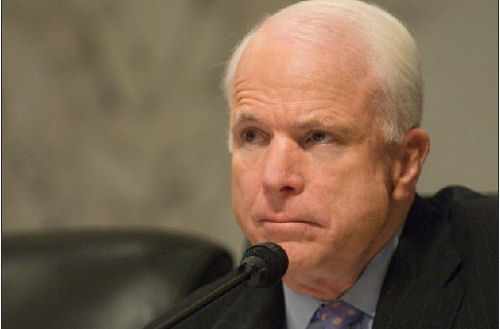 He used the backdrop of 9/11 to argue why responders needed to get their hands on the spectrum faster, but his amendment failed to move past committee. Detractors argued that the media industry would have not been ready for the switch. Still, the design of the FCC's spectrum auction, which had intended to reserve the D-block for use by first responders, was inspired in large part by McCain.

A proponent of tax policy as a business incentive

The subject of taxes plays a large part in the Senator's plans for the presidency. Among his technology policy proposals are many pro-business policies to bolster innovation.

McCain supports the use of risk capital to enable corporations to continue to obtain investment in innovation, and would endeavor to keep capital gains taxes low. In addition, he favors making permanent the Research and Development Tax Credit permanent, which is periodically reinstated and which Congress just as periodically lets elapse. That credit, say supporters, would enable US businesses to create as many as 140,000 more jobs per year, though it was allowed to elapse once again last year.

As president, McCain would also take steps to keep the Internet tax-free, a position he has held since legislation proposing Internet taxes and surcharges first surfaced about a decade ago.

Next: Where McCain played maverick, and where he didn't...

120 Responses to Where does John McCain stand on technology issues?