Peek mobile device set to do e-mail only, for $99 with no contract to sign

Harkening back to the early days of the BlackBerry, a new mobile device known as the Peek -- slated for availability next week -- definitely escapes featuritis. If e-mail is your main interest when you are mobile, maybe the Peek is for you.

It might be hard to imagine now, but RIM's first Blackberry devices acted as dedicated e-mail pagers. Next week, Target stores will start to sell the Peek, which mimics that old e-mail pager, in both appearance and for the most part functionality.

Priced at $99, the new Peek is geared to e-mail only, offering no camera, speaker, or FM radio, and not even any capabilities for either voice calling or Web browsing. A service plan costing around $20 per month will reportedly be available from T-Mobile, with no contract required.

From photos on the GetPeek Web site, Peek looks a lot like an early BlackBerry. The 4-by-7-inch device is navigable through a thumb wheel on the side. Encased in rubber on the front and metal on the back, it comes with a large alphanumeric keypad and backlit keys.

Unlike the old BlackBerry, though, the Peek isn't designed expressly for corporate road warriors who need to message back and forth with the office. Instead, it's for people who want to avoid the extra features -- and the accompanying contracts -- associated with iPhones and other contemporary smartphones.

Although BetaNews hasn't tried out the device, it's reportedly easy to set up for Web-based e-mail services such as Yahoo Mail, Google's Gmail, and Microsoft's Hotmail.

On the down side, performance seems to be an issue. Some users have complained that the Peek is slow to connect and slow to pull up e-mail, also. Quite literally, its processor is named "Lo Costo."

Convenience could be problematic, as well. Since the Peek isn't capable of voice calling, lots of people would end up lugging cell phones along with them, too.

The New York-based start-up behind the Peek has claimed to be aiming the dedicated e-mail device at those who are "intimidated" by smartphones. Yet there might well be a market for it, too, among those who simply don't want to deal with the nuisance of -- or pay extra for -- device featureitis.

After all, many users have already shown a preference in the marketplace for non-"feature-rich" camcorders, for instance. As a dedicated e-book reader, Amazon.com's Kindle isn't doing too shabbily, either.

The Peek is available for pre-order on the company's Web site, where it is already sold out in two of its three colors. 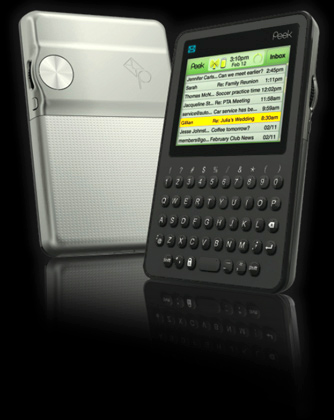 4 Responses to Peek mobile device set to do e-mail only, for $99 with no contract to sign