Internet and voice traffic to much of the Middle East and south Asia has been disrupted by the overnight loss of three major cables spanning the Mediterranean.

According to a notice from France Telecom, the three provisioning cables linking Sicily to Egypt were lost within about 40 minutes of one another Friday morning (local time). A France Telecom-owned maintenance ship will be dispatched to inspect the site within a few hours. Until then, it's not known what might have caused the cuts.

The three cables involved carry about 75% of telecom traffic to the region. The release states that much traffic between Europe and Asia is being re-routed through the US. Internet service seems to be most affected in Jordan, when it's estimated that connectivity is down by 50%. Estimates given for voice-service disruptions indicate that the hardest-hit countries so far are Maldives (100% out of service), India (82% out of service), Qatar (73%), Djibouti (71%), and United Arab Emirates (68%). Anecdotal reports also suggest that Egypt's widely affected as well.

The Internet Traffic Report at press time showed, as seen in the chart pictured (live view available), that traffic's certainly down and packet loss is up. 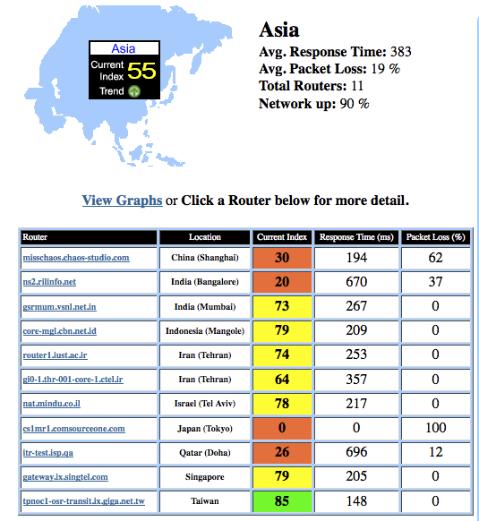 It should go without saying that fixing a fiberoptic cable at the bottom of the sea isn't as easy as swapping one strand of CAT5 for another under your desk, but some may be surprised to hear how exposed such cables often are. Many simply lie on the seabed and are buried only by whatever silt or debris collects over them. That certainly speeds up the process of getting to them when necessary, but if a cable is snagged by something dragging along the bottom (e.g., an anchor from a ship heading for the nearby Port of Alexandria), trouble can result.

At least one of the cables cut, the $500 million, 19,000 km, 1.28 Tbps SEA-ME-WE-4 stretching between France and Singapore, was one of the two cables involved the last time this happened, back in late January. That well-studied outage affected much the same area and, though storms in the region were suspected of having caused debris or an abandoned ship's anchor to sever the cables, no cause was ever identified. Four other significant cables were cut or damaged in the general region at about the same time, leading to much concern over the fragility of the Interwebs.

The other affected cables are SEA-ME-WE-3 (an earlier cable from the same 16-nation consortium, which took up much of the load during the January outage) and FLAG, a newer and supposedly more resilient cable.

France Telecom representatives currently think that SEA-ME-WE-4 could be fixed by Christmas Day, and that things should be getting back to normal by New Year's, marine weather permitting. Meanwhile, users around the world may see some congestion as traffic is re-routed.