South Korean Consumer Electronics maker LG posted a big loss in its fourth quarter 2008 earnings report this morning, and like Samsung last week, the company will restructure its business.

Like nearly everyone else now, LG's expectation is that market demand will remain slow and the Korean Won will hover at its 2008 value.

In LG's fourth quarter 2008 earnings statement this morning, the company reported a $489.7 million loss overall, which was far worse than expectations from Wall Street analysts. LG attributes the loss to the recession, increased competition (price erosion), and diminished profits from its mobile business due to greater advertising expenditures. LG expects the global economic condition will continue to impact consumer spending behavior and industry dynamics across the board in 2009, and has proposed a change to its business based upon this.

Where the company had four divisions before (Digital Appliance, Digital Display, Digital Media, and Mobile Communications), it will soon have five. Mobile Communications -- one of LG's strongest divisions -- that includes Mobile Handsets and PCs will remain the same. The other divisions will separate along the same lines that Samsung announced last week, with a distinct partition between consumer and business operations. 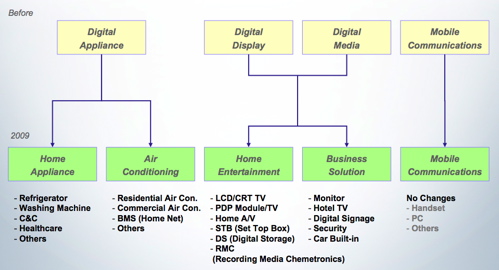