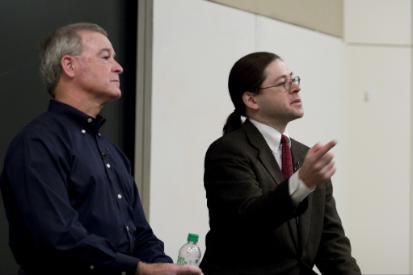 The second quarter of fiscal year 2009 was a reworking period for Sun Microsystems, which on Tuesday reported a loss of $209 million, or 28 cents/share, in the wake of its restructuring effort announced back in November.

Gross margins for products were up nearly 4% from last quarter, while gross margins on services were down 1.2%; CFO Michael Lehman explained that sometimes the company takes on a lower-margin service project in the interest of building customer loyalty.

Lehman, CFO and EVP of corporate resources, Jonathan Schwartz, CEO and president (L-R in the photo above) and VP and corporate treasurer Ron Pasek were on Tuesday's call.