Britain considers whether its citizens are entitled to 2 Mbps broadband

In a sweeping proposal yesterday, the UK's communications and technology minister, Lord Carter, has proposed a system whereby all citizens are guaranteed broadband Internet service with as much as 2 Mbps bandwidth, by 2012.

The interim report entitled "Digital Britain," published officially by the country's Department for Business, Enterprise, and Regulatory Reform (PDF available here), outlines a possibility for ministers in Parliament and the Prime Minister to consider. Just as the government mandated mail service to all citizens in 1840, and basic online data service to all citizens in 1984 under what the UK calls a universal service obligation, the report -- written with the blessing of Lord Carter -- suggests a similar USO be applied for broadband service.

The reason: Even in this negative economy, and perhaps especially so, Britons need the tools to educate themselves, keep themselves informed of their surroundings and their world, and acquire the skills necessary to obtain and keep jobs.

"While we may not always be able to stop someone losing their current job, we can invest in helping people get the next job," remarked Prime Minister Gordon Brown in a speech yesterday in London. "And as we do so we are investing, not cutting, our crucial investment in the jobs and the infrastructure of the 21st century. And it is a pivotal element in our plan for stability and recovery that we do so, for there is no credible plan out of this downturn that is not also a plan towards building a better long term economy that can create jobs.

"Today we have an interim report from Lord Carter setting out the scale of our ambition to compete in the digital economy, and that is a market worth about ?50 billion a year in Britain alone," the Prime Minister continued. "It affects every community in our country who are looking for the best digital infrastructure, the best access to broadband that we can offer them. And our digital networks will be the backbone of our economy in the decades ahead, just as roads and rails were the backbone of our physical infrastructure, and still are. And we know that every aspect of our lives in local communities, every school, every hospital, every workplace and even every home will be dependent on the services that the digital network provides. It is as essential to our future prosperity in the 21st century as electricity, roads, bridges and trains were in the 20th century. And building these bridges to the future will need a clear lead from government, combined with a strategic partnership between the public and private sectors."

As the Digital Britain report points out, "The Government remains committed to the principle of universality. We believe that principle can be updated to reflect the changed market and customer expectations in terms of technology. The existing USO model has been appropriate during a time when the fixed line was the norm for communication and [British Telecom] held a pre-eminent position in the market. Now that communications for voice and data have become accessible by different means and through a market that is considerably more complex, we need to ensure our ambitions for universality are delivered in a way which reflects reality today."

BT was allowed to take itself private in 1984, but only on the condition that it provide phone and even data service to all citizens at some basic level. Without an obvious "Ma Bell-like" national player today, the UK government would be compelled to rely upon a coalition of private industry leaders, including competitors, to make possible universal service -- which could be the tallest order of all. 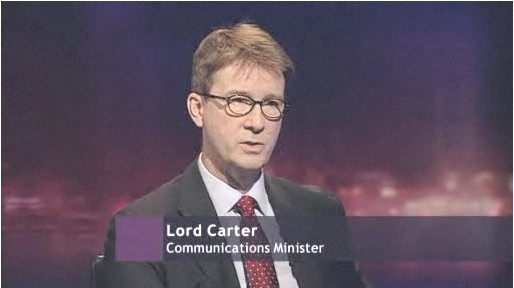 Last night on the BBC's Newsnight program, Emily Maitlis pressed Lord Carter as to how businesses are to be expected to contribute their share to a universal rollout of broadband, when the British economy is experiencing one of its worst recessions on record. "I think what's very clear is, if you look at the state of our economy -- or indeed, any economy in the world at the moment -- all economies are looking for bridges to the future. Where is growth going to come from? Where are the new industries, the growth industries? And there's a universal acceptance that the digital economy is at the heart of that," Lord Carter responded.

Three tiers of universal service are being considered under the plan: 512 Kbps, 1 Mbps, and 2 Mbps. Although the former would be the least expensive to implement, and may require only upgrading the capacity of 5 - 7% of the nation's data lines, the report estimates, the 2 Mbps service could be the most "future-proof," representing the average bandwidth that real broadband customers use anyway, and least likely to require repair down the road.

The government mandated service may not be free to all citizens, but may instead carry a licensing fee similar to what Britons currently pay for public television service such as the BBC and basic channels.