Typically, the reason a manufacturer helps a government agency build a supercomputer is to establish bragging rights. But this time, IBM plans to help the DOE put its latest creation to work with the nation's infrastructure.

It's been a long two seasons for Lawrence Livermore Labs, whose one-time heavyweight champion supercomputer BlueGene/L found itself stripped of its title belt, last time not only by Los Alamos Labs' up-and-coming IBM/AMD hybrid Roadrunner, but also by a Cray -- a name that until last year was synonymous in many circles with "dinosaur."

Now it appears the mighty L will be put to pasture, as this morning, IBM announced it will be working with Livermore once again to build what the late Douglas Adams would have described with the phrase, "none other than the computer that is to come after me." Though Roadrunner posts just over 1.1 petaflops (quadrillion floating point operations per second), IBM's goal now is to build BlueGene/P, code-named "Sequoia" -- a Power processor-based Linux cluster of 1.6 million units (IBM's announcement was foggy on whether this means cores or packages) using fiberoptic switching to achieve a speed topping 20 petaflops. 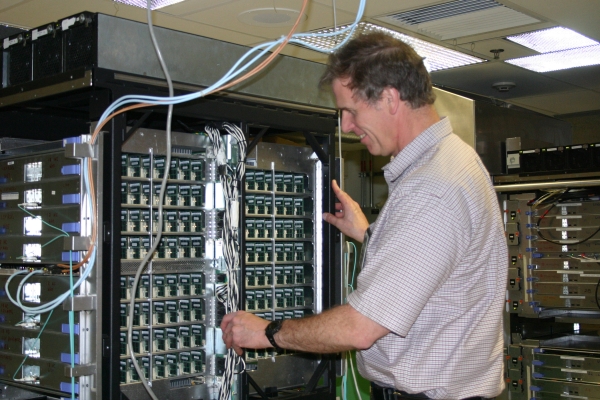 There are some serious potential roadblocks to achieving this, perhaps the least of which are technological in nature. In this new economic situation, the US Dept. of Energy (which maintains both Livermore and Los Alamos) may not as willing to back "bragging rights" efforts as it has in the recent past. So in an obvious effort to call attention to some potential real-world payoff, IBM is promising this morning that Sequoia will be used for real applications, such as earthquake prediction and damage modeling for entire counties, real-time mapping of evacuation routes in a national emergency, and severe storm forecasting.

The company says Sequoia could provide a 40- to 50-fold improvement in the nation's capacity to provide such data; however, it's worth pointing out that the previous administration's failure to respond to national emergencies was not for lack of data.

Though quad-core processors are the norm for today's supercomputer designs, multicore technology will likely have enabled at least two more powers-of-two by 2012; so it's a safe bet that Sequoia will use at least octo-core processors, if not 16-core ("hexadecacore?"). But it should also be pointed out here that IBM's investment, curiously, is in its traditional Power processor line, and not the arguably more capable Cell BE line which includes Power-based cores.

3 Responses to IBM raises the goalpost: 20 petaflops in three years