AMD: Considering the chips that comprise the cloud 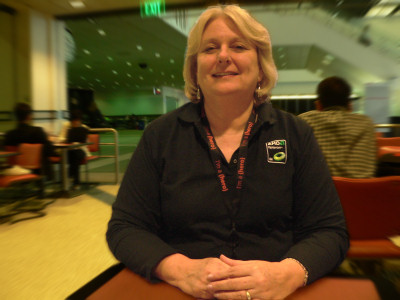 In all the talk lately about "the cloud," the topic of computer processors doesn't always happen to float by. But it should, according to AMD's Margaret Lewis.

As AMD's director for commercial software solutions and strategy, Margaret Lewis chimed in with representatives of Accenture, Amazon, Red Hat, The Shumacher Group, and the IDC analyst firm in a star-studded panel discussion about cloud computing earlier this week.

Like all of these other companies, AMD is a "technology enabler" for the cloud, Lewis maintained.

The AMD-hosted panel on "Building the Business Case for Cloud Computing: Understanding the Opportunities and Benefits took place" as part of IDC's Cloud Computing Forum in San Francisco. The conference drew attendees from IT user organizations ranging from financial institutions to government agencies, along with a wide assortment of Web services providers.

Users contemplating early cloud adoption peppered the panel with questions along the lines of, "How good is security in the cloud?" and, "What happens if I move from one cloud to another?"

AMD's Lewis focused much of her remarks on how AMD's hardware virtualization works hand-in-hand with software virtualization technologies such as hypervisors to support cost effective cloud computing. Cost performance benefits can accrue across areas that run the gamut from infrastructure to energy use, she said. Cloud infrastructures perform better when cloud resources are kept as close as possible to users, for reduced network overhead, she elaborated later, in an interview with Betanews.

Virtualization can help that to happen by supporting geographic distribution of relatively small yet powerful servers that can run multiple operating systems.

Quad-core AMD Opteron chips are being used as the underlying processor behind implementations of Microsoft's Azure virtualization software, for instance. "We have lots of other examples, too, many of them involving very advanced approaches to virtualization," she told Betanews.

In addition, cloud service providers such as Amazon are looking to use the "smallest possible power envelopes," Lewis said. Expenses are skyrocketing around requirements to both power and cool cloud-enabling data centers.

To that end, AMD entered widespread release in late January with new low-power 45 nm quad-core AMD Opteron" HE processors. Depending on configuration, the chips are variously designed for very high-end data center customers, and for smaller data centers that need to maximize performance it peak hours while managing energy costs during low-utilization hours.

Initially included in eight server models from Hewlett-Packard, AMD's new lower-power chips are expected to be available for systems from Dell, Sun, and other IT vendors later this quarter.

2 Responses to AMD: Considering the chips that comprise the cloud