My first day with Kindle 2: I'm finally ready to drop the paperback

I've always been a fan of technology that makes it easier for me to consume media. I bought the Diamond Rio PMP-300 the day it came out in 1998, was an early customer of TiVo, and can't imagine renting movies from a physical store after being a Netflix subscriber for over 8 years.

That's why I pre-ordered the first Kindle the moment it was announced in 2007. I had previously tried out electronic book readers from companies such as Sony, but they all lacked the complete ecosystem that makes it actually worthwhile to switch to digital books. The Kindle seemed to have it all: a fairly slim form factor, great screen, and a huge library of books easily downloadable with a single click.

Or so I thought. My expectations were high, and I found myself disappointed with Kindle 1.0, leading me to continue shopping at Barnes & Noble on occasion. The first-generation offering from Amazon had a confusing user interface, awkward plastic casing, sluggish screen and a battery that couldn't seem to hold a charge even when turned off.

Minor gripes, perhaps, but when a device isn't fun to use and sometimes even frustrating, it's easy to revert back to real paper. Thankfully, Amazon seems to have taken customer feedback to heart and revamped the Kindle for version 2, which was announced earlier this month and began shipping this week. UPS dropped off my Kindle 2 yesterday morning, and after just a day, I think I'm ready to help save the forests.

But before I delve into my experience using the Kindle 2 for 24 hours, I feel I should explain why I would spend $359 on a device that still requires you to buy the digital books. After all, even if you save $5 per book, that would require reading 70 books before breaking even. As with most things, however, convenience is what you're paying for -- just like with an iPod or monthly TiVo subscription.

Despite what Steve Jobs says, some people do still read books. I usually have 2 or 3 titles I'm reading simultaneously. With the Kindle, I can have my library in the palm of my hands, deciding what I want to read each time I pick it up. Heavy hardcovers no longer weigh down my carry-on bag when traveling, and if I get bored, I can quickly browse and buy new books in seconds.

Moreover, the Kindle can automatically deliver newspaper and magazine subscriptions to you, which is incredibly useful, especially when on the go. Although I haven't used the Kindle for reading RSS feeds or surfing the Web (my iPhone does that job well), I have found myself making use of the built-in dictionary to look up words on occasion. And yes, digital books are cheaper to buy than the real thing, and Amazon frequently offers promotions like it does in its MP3 store.

To be honest, I was a bit disappointed when my Kindle 2 first arrived. It's packaged in a drab cardboard box that looks like it's missing a giant sticker in the middle; Amazon could definitely learn a thing or two from Apple in the attractive packaging department. Thankfully, the Kindle 2 itself is incredibly svelte, the metal backing giving in a solid feel that was missing from its predecessor. Unlike the first Kindle, which was thicker on the left side, the Kindle 2 is as thin as pencil all the way around. 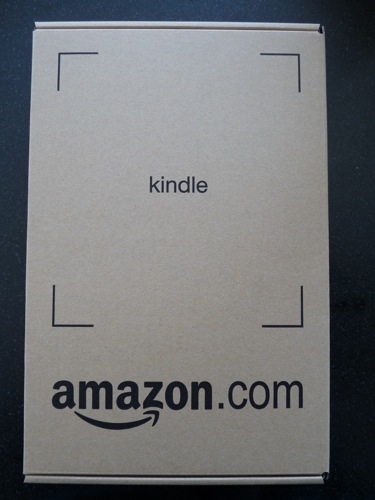 How does it compare in terms of usability? The screen really does feel much faster (Amazon claims 20 percent), and the Kindle 2's software interface is vastly easier to navigate. A MicroUSB port now serves as the power and sync connector, and a single button at the top either puts the Kindle to sleep or turns it off. Because the e-ink screen can hold an image without wasting power, it's rare that the Kindle will need to be shut down entirely. Activating the 3G wireless connection has been moved into the top-level software menu, which is quick and easy to access.

Kindle 2 gets rid of the scroll wheel for a 4-way joystick, which I wasn't excited about, but found it easy to use and more flexible for selecting content on the screen. The Next Page and Previous Page buttons have also been made smaller to lessen accidental clicks, which Kindle 1.0 users will attest can be a frequent problem. The Home button has been moved from the keyboard to a larger button on the side, another welcome change.

Since digital books don't have "pages" like traditional books, it was sometimes frustrating not to know exactly how far along you were. Amazon has remedied this in the Kindle 2 with a percent meter at the bottom of the open book. A new text-to-speech feature is a neat idea, but pretty useless in actuality, as the computer voice is nearly impossible to understand and quite grating.

Amazon now has 240,000 digital books available for purchase from the Kindle Store, with best sellers priced at $10. Older books run between $3 and $6. Like before, Word, PDF, JPEG and text documents can be converted to the Kindle's format for 10 cents each.

Perhaps most importantly, though, Amazon says the battery life of Kindle 2 has been improved by 25% (that's 2 weeks of reading with wireless off, as I usually keep it), which seems about right based on my rudimentary testing. That and the improved form factor were reasons enough for me to justify the upgrade. 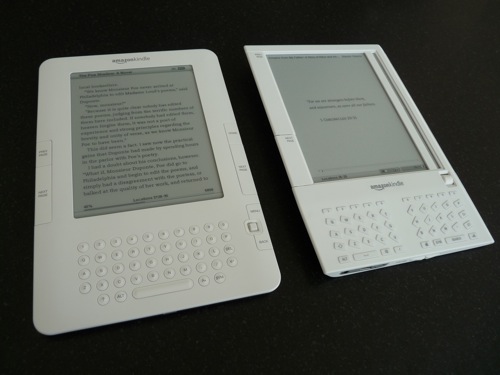 Hopefully, Amazon will figure out a way to enable customers to delete the book from their Kindle account and send it to a friend's. One can dream.

While the user interface is improved on the Kindle 2, it's not perfect. There's no option to delete a book (move it into Archived Items) from the menu. Instead, you press the joystick to the left, which isn't immediately obvious. And despite the vastly better form factor, the keyboard on the Kindle 2 takes up an extraordinary amount of real estate. For how often I use it, I'd rather have a smaller device with an on-screen keyboard.

I also still worry about the e-ink screen. It's not protected by anything, and Amazon now requires that you purchase a cover for the Kindle 2 separately (one came with the first model). Although I haven't had any disasters with my first Kindle, I do have to take extra care, which would not be required if I were simply tossing a book in my bag.

Overall, these are small quibbles and Amazon has really created an impressive device that will change the way millions of people read books. It's not for everyone yet, but I've already found myself recommending the Kindle 2 as the device to buy to friends and family. If you read more than a few books a year, travel, or even just don't see a need for devastating the rain forests to make more paper, the Kindle is for you.

Plus, it's just plain fun to use now. 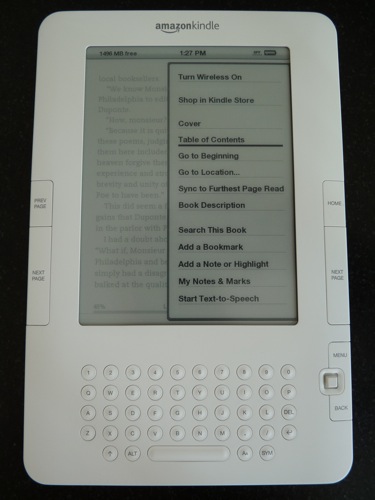 31 Responses to My first day with Kindle 2: I'm finally ready to drop the paperback