It's looking more and more like Mozilla is ready to really do this: Late last night, the organization posted the first public beta of the browser that could end up being "Firefox Mobile." It still goes by the code name Fennec, and the first beta is testing whether touchscreen mobile users will be willing to have literally all their browser functions be placed off-screen, if it makes room for more elements of the Web page.

For now, the development team is still working on functionality before it begins the long and probably painful process of developing multiple versions for different mobile operating systems. So the only mobile handset actually capable of testing a Fennec version compiled by Mozilla itself is the Nokia N810. But the JavaScript that comprises the core of the browser may still be tested in Windows, Mac OS X, or Linux. So most testers will still be pretending that their mouse pointer is their finger.

And they'll also be able to test the efficiency of the TraceMonkey JavaScript engine, being developed for Firefox 3.5 and which graces Fennec with its presence for the first time. 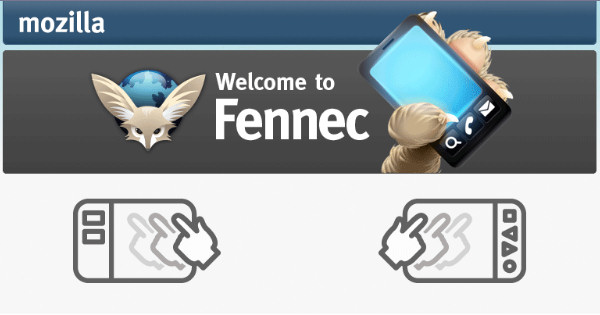 In an evidently conscious attempt to see if the whole functionality-on-the-side thing is intuitive enough, the Fennec beta's default home page contains no textual instructions -- just a couple of pictograms that invite the user to shuffle the page around to find stuff. A veteran Web browser user will probably be able to decipher what each margin means: URL at the top, active "tabs" (with thumbnails) along the left, and Back and Forward buttons, along with Options, along the right. Current browser history comes up automatically whenever you activate the address bar.

"On the feature front, we've enabled plugins so you can now watch videos on your favorite sites, and we've got in our first pass at improved bookmark management and support for bookmark folders," reports Mozilla contributor Stuart Parmenter on his blog last night. "A lot of time was spent on infrastructure that we could use to build the rest of our app with. You're now able to scroll things like preferences and the new bookmarks list. One of our main focuses for the next milestone will be on polishing the user interface ??" areas like the extension manager will get a face lift and we'll start working more on some of the usability issues people have reported."

Since the alpha versions we've played with, the Favorites (bookmarks) appear more simplified, and that's a welcome change. Instead of tabs as we've come to know them on the desktop, Fennec maintains a "bay" of active Web pages whose thumbnails are represented along the left. Whether this feature will translate well to the small screen still remains to be seen: Maybe, just maybe, you can tell Betanews by a postage-stamp-sized rendition of its layout, but that might not be enough. 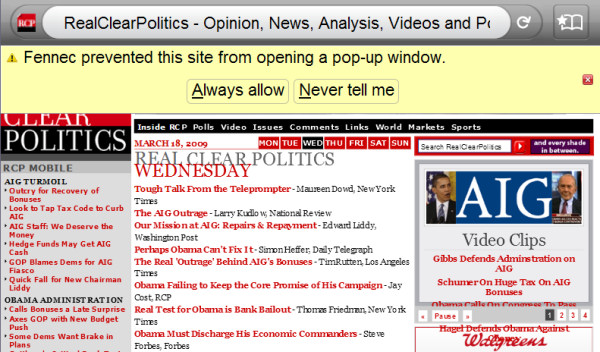 But there's other early evidence that features just being ported from Firefox desktop code still need to be tweaked for the mobile user. For example, it's nice that there's still an information bar that warns the user of potential problems. But buttons on the information bar need to be big and prominent...and I doubt that too many mobile users will prefer the "keyboard shortcuts" (still indicated in this screen capture by the underscores beneath A and N). And the little warning icon on the left may be smaller than an ant if it gets translated to a screen the size of, say, the Sidekick's.

Now Mozilla will have the opportunity to get feedback from a much broader audience, although they'll still be desktop users for now who are enthusiastic about the prospects of finally getting Firefox onto the small screen.