Here comes the Cloud Manifesto, to be signed by the usual suspects

The leader of a company called Enomaly, which manufactures an elastic computing platform toolkit for companies to build their own cloud computing platforms, is the "instigator" -- to use his own word for it -- behind a document referenced by Microsoft yesterday calling upon manufacturers in the cloud space to come together. The "Open Cloud Manifesto" is being drafted now, and will be revealed Monday at a cloud interoperability conference in New York City. Betanews will be on hand to cover it.

The manifesto will be the founding document of a group called the Cloud Computing Interoperability Forum, which describes itself as having been "formed in order to enable a global cloud computing ecosystem whereby organizations are able to seamlessly work together for the purposes for wider industry adoption of cloud computing technology and related services. A key focus will be placed on the creation of a common agreed upon framework / ontology that enables the ability of two or more cloud platforms to exchange information in an unified manor."

As of 10:00 am EDT Friday morning, the charter members of the Cloud Computing Interoperability Forum -- led by Enomaly founder and CTO Reuven Cohen -- included Intel, Sun Microsystems, French telecom carrier Orange, Cisco, RSA, and cloud services and products providers such as Adaptivity and Appistry. IBM -- the target of Microsoft's indirect finger-pointing yesterday -- was not listed as a member. 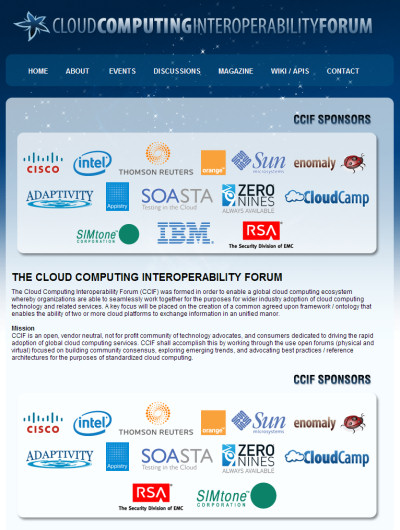 Not until 10:30 am EDT, that is, in a changeover that users of the CCIF Web site could literally see in progress, like a "before" and "after" comparison.

Yesterday, Microsoft Azure product manager Steven Martin took a public stand against the creation of any kind of open cloud group that -- at the risk of sounding like I'm paraphrasing Groucho Marx -- wouldn't have Microsoft as a member. In a blog post yesterday, Cohen confirmed having shown Microsoft the document, but he says, only in the interest of having Microsoft as a member.

"It is unfortunate they feel this way," Cohen wrote. "Microsoft was among the first to review the manifesto. Their 2:28 am [Thursday] pre-announcement of the manifesto was a complete surprise given our conversations. If Microsoft is truly committed to an open cloud ecosystem, this document provides a perfect opportunity to publicly state it." [UPDATE: By March 30, this particular post had been removed from Cohen's personal blog.]

Microsoft has yet to issue a public response to Cohen, and may be waiting for Monday's public unveiling of the CCIF. In a preliminary statement, under the heading "What We're Not," the new group states, "The CCIF will not condone any use of a particular technology for the purposes of market dominance and or advancement of any one particular vendor, industry or agenda. Whenever possible the CCIP will emphasis the use of open, patent-free and/or vendor-neutral technical solutions."

It sounds as though IBM may have just joined a group that wouldn't have IBM as a member. Unless one thinks there's a difference between "grid computing" and "cloud computing," IBM holds key patents in the field of distributed computing technology, including one that was issued in January 2008. That patent's description contains the following: "A grid computing environment may be a type of parallel and distributed computing system which enables the sharing, selection, and aggregation of geographically distributed resources at runtime depending on their availability, capability, performance, cost, and/or user's quality of service requirements."

It may be argued that IBM has the right to use patents to protect its intellectual property, especially if it's protecting the rights of partners or anyone else to use that IP in a free and open manner. But that's not exactly "patent-free," as Cohen describes it on his CCIF Web site...unless one wants to maintain an arbitrary border between the two metaphors.

Speaking of metaphors, elsewhere on the CCIF's blog, Cohen uses a very prominent one to spell out his group's principal goal: "Given the nature of this document we have attempted to be as inclusive as possible inviting most of the major names in technology to participate in the initial draft. The intention of this first draft is to act as a line in the sand, a starting point for others to get involved. That being said, this manifesto is not specifically targeting any one company or industry but instead is intended to engage a dialogue on the opportunities and benefits of fostering an open cloud ideology for everyone."

1:28 pm EDT March 27, 2009 - This afternoon, InfoWorld's Tom Sullivan is reporting that two new entrants to the CCIF, in preparation for the big event next week, admitted that they were first approached to join not by Enomaly but by IBM.

4 Responses to Here comes the Cloud Manifesto, to be signed by the usual suspects