Office 2007 SP2 is released, can indeed save ODF by default

Now all Office users will have the option to load and save OpenDocument files, with today's distribution of Service Pack 2 of Office 2007. In something of a surprise -- contrary to what many at Microsoft led us to believe -- upon installing SP2 on our test systems, we immediately located an option for saving files in ODF by default. That means you don't have to "Save As" and export to ODF if you don't ever want to use Microsoft's OOXML or Office 2003 "compatibility mode;" you can at least try to use Word, Excel, and PowerPoint as substitutes for OpenOffice.

Not that Microsoft won't give you a little heck for it along the way, in classic Microsoft fashion. For example, after changing our default format to ODF, we tried saving a simple Word file that had nothing more than a single sentence of placeholder text, nothing else. Immediately we saw the first security warning, "Document1 may contain features that are not compatible with this format. Do you want to continue to save in this format?" The check box at the bottom of the dialog suggested to us that we would see such a dialog each and every time, unless and until we checked "Don't show this message again." That's Microsoft's little way of saying, don't blame us if your documents don't turn out 100% the way you expect them to. 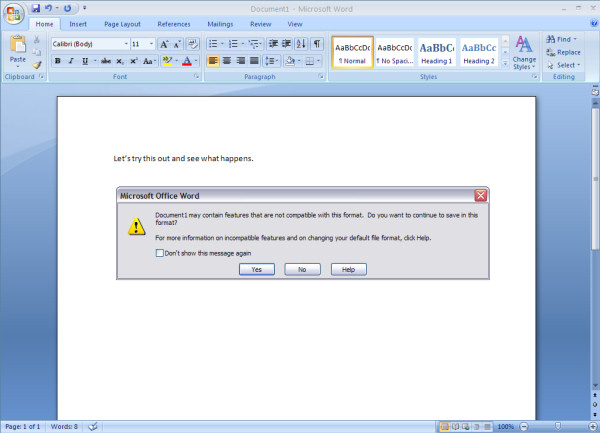 The next little surprise is that the default save format is not the same as the default load format. So after you've saved your Word document as an ODT, clicking on the Office button and selecting Open gives you the usual list of files saved in Microsoft formats. In the file selector box, under Files of type, you have to scroll to the middle to see OpenDocument Text (*.odt) -- the list is not in alphabetical order, so that entry falls below XML but above WordPerfect.

Here's how to set the default save format in SP2: Click on the Office button (the big round logo in the upper left corner) and from the bottom of the menu, select Word Options. In the dialog box, from the left pane, choose Save. Then from the list box marked Save files in this format, choose OpenDocument Text (*.odt) (in Word 2007, or its equivalent in Excel or PowerPoint). Then click on OK.

We expected to see OpenDocument given equal treatment along with PDF, the portable document standard created by Adobe and now treated as vendor-neutral. While you cannot "open" a PDF document in Word (that's to be expected, Word and Acrobat aren't exactly in the same category), you can use Save As to export an open document to a .PDF file. If you're an Adobe Acrobat Professional user, you've already had an easier option added to your Office menu by Acrobat itself: Save As -> Adobe PDF. However, for non-Acrobat users who may only have Adobe Reader, this extra step does save you the hassle of installing something like "PDF Writer" as a printer driver, and printing as a means of exporting.

Office Live services have been obviously boosted in priority with SP2. Up to now, using the Office Live add-in has resulted in adding an extra place to your Save As dialog box, enabling you to directly load and store your Office documents to your personal storage space in Microsoft's cloud. Now with SP2, Open from Office Live and Save to Office Live become prominent selections in the Office menu, and the controls for signing into your online workspace are embedded into the menu -- no shoving off to IE just for the sign-in screen.

Service Pack 2 rolls up a truckload of security-related attachments and bug fixes since December 2007 -- the release date of SP1 -- and also fills an important gap in Word's and PowerPoint's functionality.

Users of Microsoft Update this afternoon noticed "The 2007 Microsoft Office Suite Service Pack 2," complete with the "The," as a high-priority or important update along with Internet Explorer 8, which is now being pushed as an operating system update for the first time.

Here's some advice for you: Download Office 2007 SP2 either from our Fileforum page or using Automatic Updates, and not from a link you find on Microsoft.com. The latter is what we did, and that choice prompted us to download the latest version of Microsoft Internet Download Manager, whose performance -- at least we hoped -- was not a foreboding of things to come. First, it crashed our Firefox browser, taking with it the active session (for that reason alone, you may want to just use IE to download SP2). But when the browser was restored, we were shown a page that merely asked us to execute the just-downloaded installer file before proceeding. Not a kind way to give us the message.

Anyway, we did that and restarted Firefox. Then we noticed that the Download Manager failed to properly register itself; had it been registered properly, it would have detected that it was supposed to handle the automatically triggered download. As it turned out, the Registry triggered Visual Studio 2008 instead, which doesn't make for a very good download platform. We exited out of that and patched the Registry manually. Then and only then were we able to make the download properly, except that for a reason we can't fathom, the Download Manager downloaded the file twice. Remind us to give Download Manager 5.17 a low Fileforum score when we get a minute.

We're continuing to dig into the new features of SP2, including the long-awaited addition of the module that adds the same new charting functionality introduced in Excel, to Word and PowerPoint. We're also looking forward to seeing whether a window updating bug that's peculiar to Nvidia drivers has been addressed. We're only moments into our examination of SP2, and we'll let you know more when we do.

23 Responses to Office 2007 SP2 is released, can indeed save ODF by default