The legacy of Khan: Star Trek's first collision course with the mainstream

My best friend Jeff saved me a copy, because he knew I'd not only want to see it but dissect it, the way a hungry crow goes after a freshly slammed armadillo in the middle of I-35. I was a Star Trek fan the way a New Yorker is a fan of John McEnroe or an Oklahoman is a fan of the Dallas Cowboys, loving to see them in the spotlight but always critiquing their style. Jeff was the assistant manager of a movie theater with four (four!) screens, so he got the advance promotional kit for Star Trek II: The Wrath of Khan, and Jeff saved me the first promo poster with stills from the movie. Between the premiere and my high school graduation, the premiere was -- at least at the time -- the more exciting event. 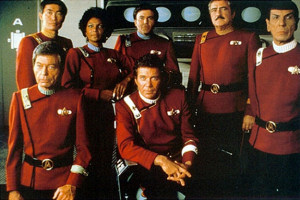 I can't think of Star Trek movies today without picturing the gang of us seated around the linoleum tables at Big Ed's, chomping down a heap of fresh-cut fries and taking apart the pictures from the promotional kit for clues. What was the meaning, for example, of Uhura's and Chekov's sweater collars being blue-gray, while Sulu's and Scotty's were mustard yellow?

If you're wondering, why bother with such trivia when we knew the answer (if there was one) was something arbitrary, consider this: Not only is Star Trek the first, and perhaps the only, franchise born of television to become elevated to the realm of global folklore, but it was never really born of the mind of one person. Gene Roddenberry was not to Star Trek what C. S. Forester was to Horatio Hornblower; Trek was and still is, in many respects, a public playground built on intellectual property seeded by Roddenberry but left to flourish. So unlike a franchise devised largely or solely by one person -- for instance, J. K. Rowling's Harry Potter -- there's a certain accountability to the public that Star Trek has, that's shared by no other collective work of fiction. It's the closest thing you'll ever see to open source that will ever emerge from a Hollywood studio.

The true Star Trek fan is someone who has an unusual personal investment in the story. So when someone dares to take the story further, the fans are folks who have an interest in the outcome, and who want to hold the writers and producers to their bargain. And for folks like us whose junior high and high school lives were, for most days, peculiarly unworthy of ever being chronicled in hardcover or on the big screen, Star Trek was not so much an escape as an endeavor in survival. It was the hope of something bolder, more worthy of our time and effort, than the institutionalized hopelessness that kept us chained to our seats while our teachers were on break, or wherever they had ventured off to.

It was also the ticket to everything bigger. My very first exercise in learning to program a computer was debugging an 80-column line-printer-driven Star Trek game that incorrectly scored the number of Klingons the player had killed. By the time The Wrath of Khan was first being advertised, most of my friends and I were collaborating on the production of a bigger and better Star Trek game that used artificial intelligence techniques I'd been learning. It was the beginning of the open source movement (which also meant we couldn't make a dime from our work without owing Paramount). I dove into college-level trigonometry long before graduation, in an effort to build a combat model for three-dimensional space.

As a young kid, Star Trek helped me feel not so alone, at a period of time when I was absolutely alone when a boy shouldn't be. So imagine my surprise when Trek II was first coming out. It wasn't playing at Jeff's theater -- it was two miles south, at the Quail Twin Cinema, theater #2. Number two was huge, it had the best sound system, it had two aisles, could hold a few thousand seats, and was adorned in the most other-worldly blue curtains. Had the screen fallen down, you might be able to play football on the thing.

The line for Trek II that June afternoon extended behind the theater, around the perimeter of the parking lot, into the lot of the nearby tire store, out along May Avenue, down two blocks, and into a residential neighborhood along 112th Street. A police cruiser was stationed along the street to keep order, remembering that when Star Wars premiered just a few years earlier, there were protesters ("God is the only force!"). There were enough teenagers there to fill my high school twice over.

My friends had staked out a prime position for us all, enabling me to take a walk down the admission line. There I'd find what seemed like several hundred of the same folks who used to make fun of my Star Trek fandom, who had been guilty of the unspeakable sin of confusing Trek with Wars ("Hey, Scott, you been on the Enterprise with Obi-Wan lately?"). I marched alongside them like Capt. Kirk reviewing the troops, and many of them knew exactly what I was thinking and how I felt. It was my victory march. It meant more than any diploma I had ever received.

Once inside Quail #2, Trek II was -- and is to this day -- the most fun I have ever spent in a movie theater without a date. There were thousands of us, guys like me and folks unlike me at all, openly speculating on the meaning of Uhura's and Chekov's blue-grey sweater collars. Rarely did fifteen seconds pass during the film without some audible form of mass audience reaction, including openly cheering for the stars names in the opening credits (the whistles for Kirstie Alley could have shattered glass). Guys who spat in my general direction during my cold, grey junior-high years were snarling at Khan, wincing when he put the scorpion-thing in Chekov's ear, hissing when he channeled Captain Ahab from Moby Dick. When Sulu's phaser shot took out the Reliant's torpedo launcher, the theater erupted in a deafening roar that made it impossible to hear the dialogue for minutes thereafter.

And several of them even shook my hand after it was done, or nodded in my general direction, or gave me some acknowledgement that we as a people had grown up at last, that we were all in the same league, and that letting your mind play on the public playground of science fiction was a real blast. It was our graduation day, in a very real sense.

In the US, folks will be seeing the latest Star Trek movie for the first time -- the 11th in the series -- tonight. And if you're wondering why it's more important than your average movie for many of us, it's because that's our story they're messing with, and they'd better mess with it right.