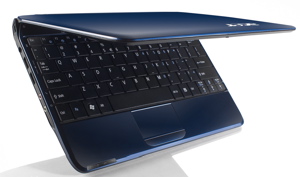 Acer unveiled its second-generation netbook products today, which include the 11.6" Aspire One 751h, a unit that goes for the bigger overall footprint but with a marginally slimmer profile.

What makes this line unique among Acer's netbooks and more like its competitors is its multi-touch gestural trackpad, and its two-inch growth in overall size. Netbook innovator Asus recently took the same tack with its "Seashell" Eee PC, which slimmed down its traditional Eee PC netbook, and equipping it with a multi-touchpad.

6 Responses to Acer increases netbook size with new Aspire One