Bing vs. Google face-off, round 3

If you've ever used any of the major travel sites like Travelocity or Priceline to plan a business trip, you may have already encountered what I consider to be their principal deficiency thus far: They don't make hotel suggestions based on the hard, raw data about what amenities are in the general vicinity, and what travelers want to see or to have close at hand.

That's why I typically end up choosing my places to stay using a search engine rather than a travel site. First of all (and perhaps you've already noticed), I work on a very limited budget. And though user reviews are helpful, especially the ones from actual people, I need access to resources. Public transportation becomes my best friend. After that, I need auxiliary sources for Internet access should my primary source no longer work. I need to know what office supply stores and electronics stores are within walking distance should something break or need replacement. I need to know the best places to suggest a really good dinner should I end up dining with colleagues or with a source for a story. Is there a semi-decent place for me to pick up a late dinner to go should I be working late from my hotel room? These are all make-or-break matters with me when it comes to staying in a new city -- matters which the major travel sites simply cannot, or do not, address.

Google has saved my neck before on countless occasions. The exception was Boston, back before satellite imagery was integrated into Google Maps, when it appeared on the surface that my hotel and my bus stop were separated by 200 yards, but in-between those 200 yards was an interstate highway underpass closed to pedestrian traffic. And the sudden surge in quality of Windows Live Mobile, especially from my BlackBerry, was giving me reason to believe there could be competition.

So for today's heat between Google and Microsoft's new Bing service, let's say I had Boston to do all over again. I want an inexpensive hotel that's close to public transportation, places to eat, and vital resources. It can be a respectable distance from the convention center, but not too far because (as I've learned to my horror) a public route that even includes the "T" can consume as much as three miserable hours from your life. Can Google Maps and the new Bing Maps 3D point me to where I should stay? If you're keeping score at home, you'll recall we left things at Bing 2, Google 2.

After a few years of responding to user queries, Google definitely has a handle on how infrequent travelers such as myself tend to navigate. We like to plan for landmarks, and like spinning a navigator's compass, we triangulate our future locations based on those landmarks. If this version of Google Maps had been available several years ago, I would never have ended up staying in hell. I found a respectable candidate for a business-class hotel, the Midtown (this is not an endorsement, I haven't stayed there yet), just across the street from Symphony Station on the Green Line. Google shows you metro stations with blue "M" icons, and rail stations with train icons, on its close-up city maps. 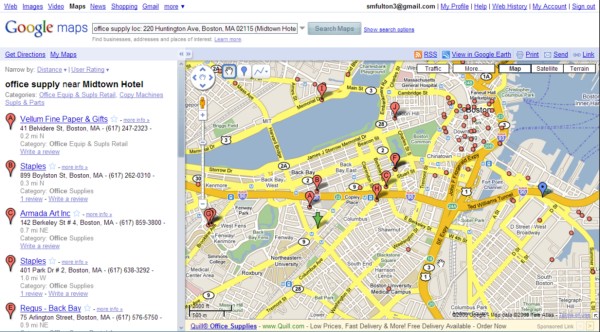 As for office supply stores, there's a Staples on the other side of I-90, which I learned about by clicking Search Nearby on the bubble pointing to the hotel. Now, I've learned that an interstate highway may as well be the Great Wall of China when it comes to walking from place to place in Boston, but the map here shows me that Hynes Convention Center station (not the same as BCEC) is just on the other side of I-90, meaning I can at least get there from underground.

Another "Search Nearby" of "Wi-Fi" reveals that there's a free Wi-Fi zone at the Boston Architectural Center, also near Hynes station. There's also a few places to eat in that area too, though if I'm willing to take more of a pedestrian adventure, I could walk four blocks southeast of the hotel and visit a four-star rated Mike's Diner that looks to be about my speed.

I found out all this information through Google Maps in about three minutes' time. For Bing to be more than just a pretty 3D permutation of Virtual Earth, it needs to clear this very high hurdle.

14 Responses to Bing vs. Google face-off, round 3